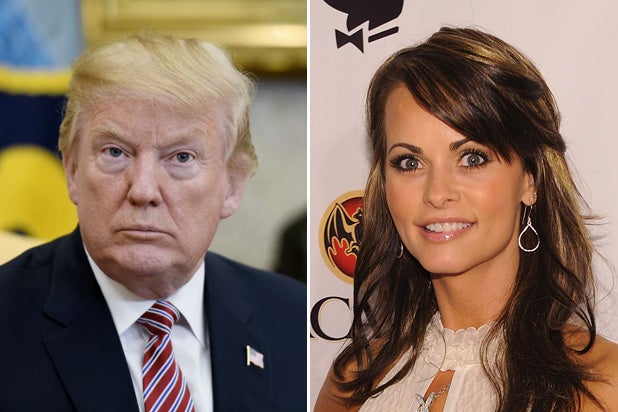 Karen McDougal, the former Playboy model who said she had an affair with Donald Trump, is taking a page straight out of the Stormy Daniels playbook.

According to a The New York Times report, McDougal filed a lawsuit on Tuesday to get out of her 2016 non-disclosure agreement, becoming the second woman in two weeks to file a lawsuit accusing the president or his allies of trying to bury news about a Trump extramarital affair.

McDougal is suing American Media Inc., The National Enquirer’s parent company, which, according to the Wall Street Journal, paid her $150,000 to buy her story — but never ran it. The Enquirer’s chief executive, David Pecker, is a friend of Trump’s.

The White House did not immediately respond to TheWrap’s request for comment. But Trump has repeatedly denied both affairs.

In her lawsuit, filed in Los Angeles Superior Court, McDougal claims that Michael Cohen, the president’s personal lawyer, was in talks with American Media behind her back and that both AMI and her lawyer at the time misled her about the deal.

McDougal, who spoke to The New Yorker last month, after the publication obtained notes she took about Trump, said that A.M.I. “warned” that her breach of the non-disclosure agreement could result in “considerable monetary damages.”

McDougal’s lawyer, Peter K. Stris, told the Times, A.M.I. was engaging in “a multifaceted effort to silence” his client.

McDougal filed her suit just as Clifford is about to make her “60 Minutes” debut, which, according to The Washington Post, is tentatively scheduled to air this Sunday.

Trump’s team is seeking $20 million from Clifford, arguing she violated her non-disclosure.

The Wall Street Journal has reported that A.M.I., one of the country’s largest tabloid news providers, is known to buy damaging stories about allies for the sole purpose of burying them, a practice known as “catch and kill.”