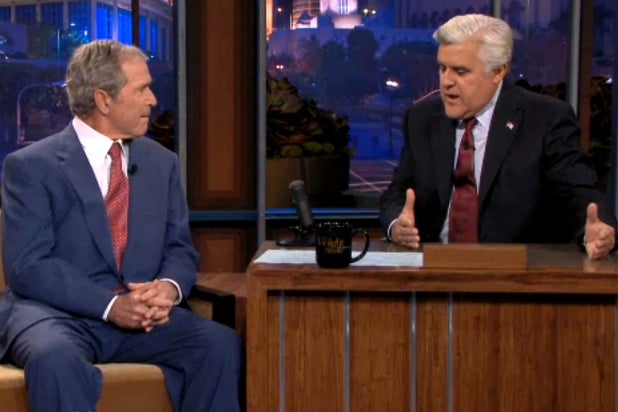 Former President George W. Bush blessed the “Tonight Show” couch for one last time to wish host Jay Leno the best as he winds down his tenure (again) on the NBC late night talk show.

The audience was treated to good conversation, some solid jokes — almost exclusively from Bush — and even a surprise visit from former First Lady Laura Bush, who discussed her husband’s health scare.

She called his heart incident “very scary,” though the former nation’s leader downplayed it himself, saying, “I wasn’t that scared.”

To which Leno quipped: “You had Obamacare?” Cue the thunderous laughter on stage and off.

“I know you’ve tried to stay out of the spotlight for the last few years or so,” a grateful Leno posed to the Texan. “So I was actually pleasantly surprised you accepted our invitation.”

“Only because of you,” President Bush said. He added, “I mean, you’re about to head out to pasture. I just wanted to see what you look like before you got to the gate.”

The jokes kept coming from the former Commander-in-Chief. Though he sometimes mixed those with poignant statements.

“I did the best I could do,” Bush said of his two terms. “I’m also very comfortable with the fact that it’s going take a while for history to judge whether the decisions I made are consequential or not. And, therefore, I’m not too worried about it.”

He added: “In other words, I’ve read some biographies of Washington. And my attitude is if they’re still writing biographies of the first guy, the 43rd guy doesn’t need to worry about it.”

See video: Matt Lauer and Sarah Palin Get Into Heated Exchange Over Obamacare

“I don’t think it’s good for the country to have a former President criticize his successor,” Bush replied, to sustained applause from the appreciative audience.

Then there was this exchange, which gained even more points with the warmed-up crowd:

Leno: “Now, President Obama’s kind of getting all the late-night jokes now …”
Bush: “Better him than me.”
Leno: “Are you glad you aren’t President now?
Bush: “Yes, I am. Yeah. Eight years is plenty.”

“I must say you look much more relaxed,” Leno said.