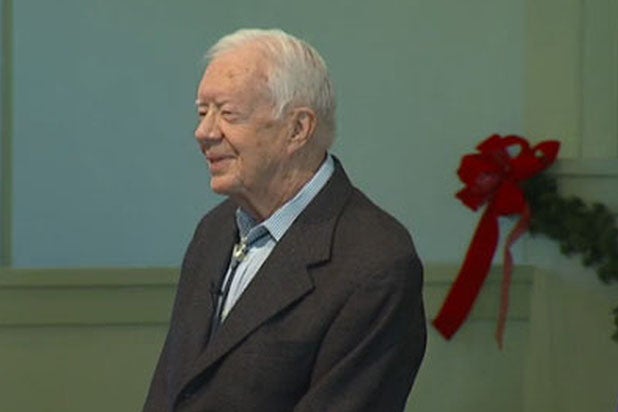 , 91, made the announcement in front of a Sunday School class that he was teaching at Maranatha Baptist Church in Plains, Georgia.

“He said he got a scan this week and the cancer was gone,” churchgoer Jill Stuckey told the Atlanta Journal Constitution. “The church, everybody here, just erupted in applause.”

In a video later posted by NBC News, Carter said: “When I went (for an MRI) this week they didn’t find any cancer at all.” He went on to describe the treatment he had received, adding, “A lot of people prayed for me, and I appreciate that.”

Also Read: Jimmy Carter Reveals Obama Is Only President Who Doesn't Call Him for Advice (Video)

revealed in August that he would undergo radiation treatment for several melanoma spots on his brain.

“I’ll be prepared for anything that comes,” he said at the time.

was the 39th President of the United States and served from 1977 to 1981. He was awarded the 2002 Nobel Peace Prize for his work with the Center.

Watch the video of Carter‘s announcement below.