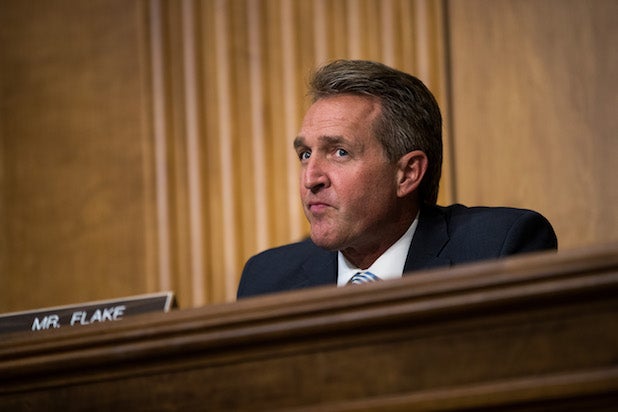 Jeff Flake, who left the Senate this year after representing Arizona for six years, can’t just walk down the hall to urge fellow Republicans not to support the president’s re-election bid, but he can get their attention with an op-ed in the Washington Post.

Monday morning, the Post published his latest, which argues President Donald Trump’s actions do warrant impeachment, but impeachment is risky: “Fellow Republicans, there’s still time to save your souls.”

He laid out what is already known, noting that the decision to begin the impeachment inquiry, which House Speaker Nancy Pelosi announced last week, came after a whistleblower complaint that Trump sought to use foreign power from Ukraine during a phone call for his own political gain. During the call with Ukraine’s president, Volodymyr Zelensky, Trump urged Zelensky to investigate Joe Biden’s son. Flake reminded his former colleagues the House “will likely be forwarding to the Senate at least one article of impeachment” as a result.

“Compelling arguments will be made on both sides of the impeachment question. With what we now know, the president’s actions warrant impeachment,” he wrote.

Flake continued, “I fear that, given the profound division in the country, an impeachment proceeding at such a toxic moment might actually benefit a president who thrives on chaos. Disunion is the oxygen of this presidency. He is the maestro of a brand of discord that benefits only him and ravages everything else. So although impeachment now seems inevitable, I fear it all the same. I understand others who might have similar reservations. The decision to impeach or not is a difficult one indeed.”

The former senator urged his old colleagues not to support Trump’s 2020 re-election run.

“I am not oblivious to the consequences that might accompany that decision. In fact, I am living those consequences. I would have preferred to represent the citizens of Arizona for another term in the Senate. But not at the cost of supporting this man. A man who has, now more than ever, proved to be so manifestly undeserving of the highest office that we have,” he wrote, adding, “Trust me when I say that you can go elsewhere for a job. But you cannot go elsewhere for a soul.”