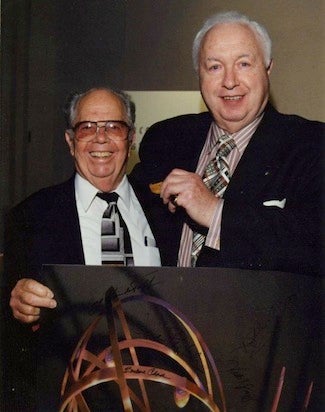 From left, Hank Rieger with Tom Sarnoff, both past Presidents of the Television Academy. (ATAS)

Henry “Hank” Reiger, former president of the Television Academy, died Wednesday in Oceanside, Calif., the Academy said Friday. He was 95.

“Hank Rieger worked tirelessly for many years on behalf of the television academy,” Television Academy Chairman and CEO Bruce Rosenblum said. Â””He believed in The Academy’s ability to have a positive impact on the entire entertainment industry, and we are deeply grateful for all he contributed.”

Following a military stint in World War II, Reiger went into journalism, landing a job at UP (later UPI). While in charge of the agency’s Los Angeles bureau, as well as San Diego and Las Vegas, Reiger broke the story of Marilyn Monroe’s death, a career highlight.

Rieger later segued into public relations, working at NBC for 15 years and leading publicity drives for series such as “Bonanza,” “I Spy” and “The Monkees.”

During his stint as Television Academy president, Rieger (pictured above with fellow former TV Academy president Tom Sarnoff) was responsible for the Student Awards and the growth of the Academy’s internship program. He was also the founding publisher of Emmy magazine.

Following his presidency at the Academy, Rieger became director of public relations for the 1984 Olympics in Los Angeles.

His public-relations clients also included ESPN, with whom he maintained a relationship up to his final days.