After weeks of flirting, Fox and Conan O’Brien are about to take their relationship to the next level.

Nobody from the network or Team Coco will talk about it openly, but it’s clear both camps have begun doing their respective due diligence as they try to figure out how a deal might be hammered out to bring O’Brien to Fox. Given the desire to get a show launched by January at the latest, industry insiders believe it’s now a matter of days or weeks (not months) before formal conversations begin. 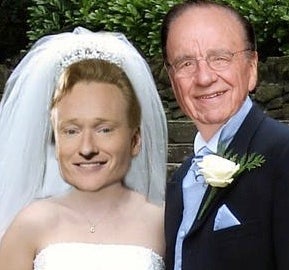 To make Conan on Fox a reality, however, everyone involved will have to eschew the dynamics of past network deals for late-night talent. This dance won’t be about a big star demanding monster amounts of money for his services (CBS-Letterman), nor will it be a case of a network rolling the dice on a largely unproven figure in the hope that the investment will eventually pay off (ABC-Kimmel).

Instead, if Coco is to find a home on Fox, both parties need to act as if they’re launching a business together — with shared risk and mutual reward. That means managing expectations, committing to a long-term plan and figuring out a way to ensure nobody gets soaked if the whole venture simply doesn’t click with viewers.

It will also require a greenlight from News Corp. chief Rupert Murdoch, who last week made it clear that he’s very open to the idea.

"Certainly if the program people can show us that we could do it, and be fairly confident of making a profit on it, we’d do it in a flash," Murdoch said during a earnings conference call. "We’re giving it a lot of thought and a lot of examination."

Beyond generalities, both sides are starting to clam up about the matter. Even in off the record conversations, people from both Fox and the O’Brien camp are suddently hesitant to talk about what’s next or possible game plans.

That’s a good sign. The NBC-Conan divorce was a messy spectacle because both parties lost faith in each other and decided there was little to lose by lobbing grenades at each other via the media.

If Fox and Conan are going to get together, all parties need to agree to not posture in the press — or in private — and instead focus on whether a mutually beneficial deal can be struck.

Other ground rules for a successful marriage, based on conversations with numerous people familiar with the late-night landscape:

– Everyone needs to realize The Coco Show will start out more like a syndicated series than a network show. That’s because some affiliates simply aren’t going to want to give up their current profits to take a chance on running O’Brien at 11, after their 10 p.m. newcasts. And Fox probably isn’t in the mood to start making too many concessions to affiliates in order to get them on board.

As a result, it’s quite possible that O’Brien on Fox would launch with far less than full national clearance at 11 p.m. Some stations will delay it until 11:30 p.m. or midnight, if they carry it all.

– Fox and Conan must be partners, both sharing the same long-term vision. Any deal needs to be structured with maximum flexibility, ensuring that if things don’t go as well as hoped — clearances lag, ratings don’t immediately spark — Fox doesn’t take a bath.

NBC insiders have said the network was paying in the neighborhood of $1.5 million per week, all-in, for O’Brien’s "Tonight Show." Fox and Coco will need to get creative in order to figure out how to reduce that sum to account for the lower ad revenues a new show would generate at the start.

It’s worth noting that O’Brien never shied away from helping NBC turn a profit, agreeing to shill for the likes of Intel and other Peacock sponsors in order to generate additional revenue streams. So maybe "The Conan O’Brien Hour" will originate live from the Facebook Theater, or Max Weinberg will head up the iPad Orchestra. We’re also pretty sure Andy Richter would be willing to have a sponsor’s name tattooed on him if need be.

It also goes without saying, then, that…

–  It can’t be about a big paycheck for Coco. Nobody expects O’Brien to work for free, but he’ll almost certainly have to take a pay cut in order to make a Fox deal work. The mega-coin offered to other one-named talents — Dave, Katie, Simon, Seth — simply isn’t going to be on the table, at least not in the front-end of any agreement.

This shouldn’t be a problem. Forget about the $30 million or so O’Brien just got from NBC. "This has never been about money for Conan," one Coco insider said weeks ago when O’Brien’s reps were deciding how to extract him from his Peacock deal.

Indeed, just as Jay Leno makes a point of not even spending his NBC coin, O’Brien long ago stopped worrying about cash flow and started focusing on what his TV legacy would be. He needs to make sure his reps, WME and Gavin Polone, check their natural blood-from-stone instincts.

– In return for flexibility, Fox will likely need to ensure some upside for O’Brien in success.

Team Coco is represented by some of the shrewdest sharks in the agency and management world, and they’re not going to make a sucker deal for a talent who’s proven in recent weeks to be a man with a loyal core of fans who’d follow him to any number of cable networks.

Whether this means a bigger payday the longer the show survives, or a Letterman-like package where O’Brien owns his own show is unclear. But however it’s structured, Fox can’t be seen trying to take advantage of its biggest bit of leverage — namely, that it’s the only broadcast network apparently available to make a deal with O’Brien.

Finally, the biggest requirement for a deal between Fox and O’Brien will be….

– Managing expectations across the board.

Here’s the reality: Coco on Fox isn’t going to beat Dave and Jay out of the gate, particularly if the show isn’t cleared in pattern by all Fox stations and affiliates. Fox knows that, but it needs to make sure O’Brien knows it knows that.

Having suffered the humiliation of being ousted by the network that raised him, O’Brien is unlikely to jump into any new deal that doesn’t give him some guarantee of at least one or two years to make his mark, no matter what the early ratings.

The network also needs to figure out how to school both affiliates and the media about what success means for Conan on Fox.

NBC did a masterful job setting a low bar for "The Jay Leno Show," telegraphing months ahead of time that it expected ratings for the series to be tiny relative to scripted fare. But it said that would be OK, given the money it would save.

What NBC never anticipated — at least not publicly — was how bad Jay ratings would hurt affiliates. Or how the 10 p.m. strategy made it harder for the network to develop much-needed new scripted hits since it had fewer primetime at-bats.

Fox ought to be transparent about its ratings expectations, the cost of production for the Conan show and how it plans to make a profit. That way, if the numbers aren’t so hot in the beginning, there won’t be a drumbeat of stories declaring the series a disappointment (or worse).

Some media observers last week seized on Murdoch’s mention of "profit" as the critical word in his comments about O’Brien, noting the very real obstacles in the way of a quick and easy transition from NBC to Fox.

And indeed, there are voices inside Fox who don’t quite get why the network would want to take the plunge into late night, a daypart that’s delivered it little but pain over 20 years (think Joan Rivers and Chevy Chase). Fox-owned stations already make a tidy profit airing repeats of News Corp. -owned properties such as "The Simpsons," and some Fox affiliates aren’t keen on the idea of handing over more ad revenue to the network.

What’s more, Fox would be entering the late-night game at a time when many viewers seemed to have moved on from the idea of going to bed with the likes of Jay and Dave and Coco. Many folks have opted against after-hours monogamy, playing around with whatever’s left on their DVRs or checking out the myriad of options on cable.

All valid points, of course.

But the Ben Silverman – Jeff Zucker theory of retreating from bold moves in order to "manage for margins" had a cold logic to it as well — and look how well that turned out for NBC.