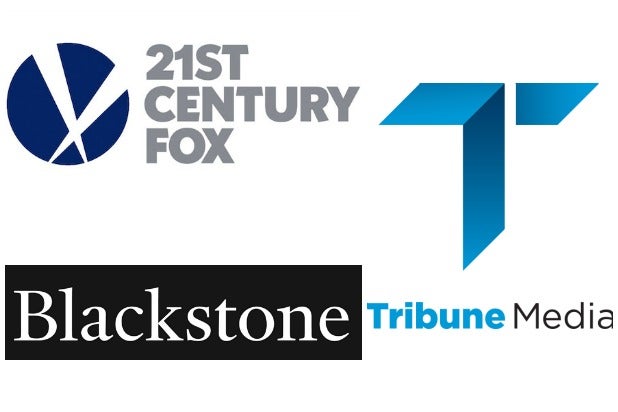 Rupert Murdoch’s 21st Century Fox is in talks with the private equity firm Blackstone about jointly acquiring Tribune Media in a deal that would give the media giant more than 40 local broadcast stations, the Financial Times reports.

Tribune Media’s portfolio includes 42 local owned-and-operated broadcast stations, as well as national cable channel WGN America. It was formerly known as Tribune Co., which spun off its broadcast assets, including the Los Angeles Times, Chicago Tribune and Orlando Sentinel, as Tribune Publishing in 2014. Tribune Publishing has since been renamed Tronc.

With Blackstone ponying up cash and Fox contributing its portfolio of owned-and-operated stations, the two companies is attempting to outbid an offer from Sinclair Broadcasting, the country’s largest broadcast station owner with 173 TV stations and 514 channels in 81 U.S. markets. If Sinclair were to acquire Tribune, it would reach more than 40 percent of viewers in the U.S., which is currently barred by the Federal Communications Commission. However, new FCC Chairman Ajit Pai, who has promised a “light touch” regulatory regime, may change those rules.

A Sinclair-Tribune combination could give them more leverage in negotiating fee splits with broadcast networks — like Fox. On the other hand, Fox being able to combine its stations with Tribune’s would give the company more avenues to utilize sports rights, namely the NFL. Fox would also be able to make more local stations available as part of streaming internet-based “skinny bundles” like Sling TV or YouTube TV, which are increasing in popularity as people cut the cord on more traditional — and expensive — pay-TV packages. Many of those streaming services are only available in select markets, partially due to the need to cut individual deals with local big four broadcast networks to make those offerings more appealing to customers.

Tribune’s stock has surged 29 percent over the last three months as acquisition rumors have swirled. Earlier this month, the company laid off several employees on its digital side, shutting down Screener TV and cancelling the planned relaunch of Television Without Pitt.