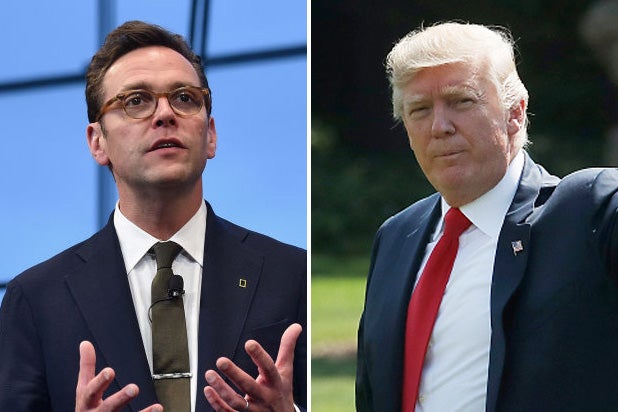 21st Century Fox CEO James Murdoch blasted Donald Trump in a memo sent Thursday to company employees, calling out the president for his tepid response to a deadly rally by neo-Nazis and white supremacists last weekend in Charlottesville, Virginia.

“These events remind us all why vigilance against hate and bigotry is an eternal obligation — a necessary discipline for the preservation of our way of life and our ideals,” wrote Murdoch, the younger son of company founder Rupert Murdoch who assumed the CEO position in 2015.

“I can’t even believe I have to write this: standing up to Nazis is essential; there are no good Nazis. Or Klansmen, or terrorists,” he continued in his memo. “Democrats, Republicans, and others must all agree on this, and it compromises nothing for them to do so.”

The latter seemed to be a pointed reference to Trump’s press conference on Tuesday in which he claimed that there was blame “on both sides” for the violence in Charlottesville, which resulted in three deaths and dozens of injuries, and that there were “fine people” among the white supremacist protesters gathered at the event.

Read the full letter below.

I’m writing to you in a personal capacity, as a concerned citizen and a father. It has not been my habit to widely offer running commentary on current affairs, nor to presume to weigh in on the events of a given day save those that might be of particular or specific concern to 21CF and my colleagues. But what we watched this last week in Charlottesville and the reaction to it by the President of the United States concern all of us as Americans and free people.

These events remind us all why vigilance against hate and bigotry is an eternal obligation — a necessary discipline for the preservation of our way of life and our ideals. The presence of hate in our society was appallingly laid bare as we watched swastikas brandished on the streets of Charlottesville and acts of brutal terrorism and violence perpetrated by a racist mob. I can’t even believe I have to write this: standing up to Nazis is essential; there are no good Nazis. Or Klansmen, or terrorists. Democrats, Republicans, and others must all agree on this, and it compromises nothing for them to do so.

Diverse storytellers, and stories, can make a difference, and that diversity, around the world, is a crucial strength and an animating force in my business. Often times not everyone agrees with the stories and positions that emerge from this, and that can be difficult. Certainly no company can be perfect. But I’m proud of the powerful art that can emerge, and I’m grateful to all of my colleagues who make this happen. From the potent and compelling narrative of “12 Years a Slave”, to the streets of Pakistan and the bravery of an extraordinary young woman that we saw in “He Named Me Malala”, to name just a few, we’ve never been afraid to help storytellers and artists say important things – hard things, too.

To further demonstrate our commitment, Kathryn and I are donating 1 million dollars to the Anti-Defamation League, and I encourage you to give what you think is right as well. We hardly ever talk about our charitable giving, but in this case I wanted to tell you and encourage you to be generous too.

any of you are supporters of the Anti-Defamation League already – now is a great time to give more. The ADL is an extraordinary force for vigilance and strength in the face of bigotry – you can learn more here: https://www.adl.org.

My very best to you and with all my gratitude,