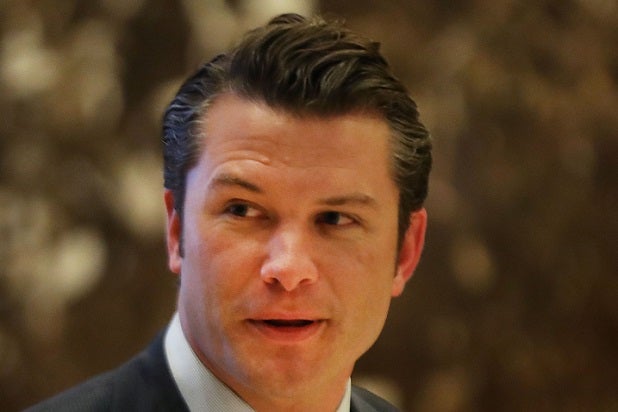 “Fox & Friends” co-host Pete Hegseth was way off target with an axe-throwing stunt, according to a lawsuit filed by a man who says he was injured in a 2015 incident.

In the suit, filed Tuesday in New York Supreme Court, Jeff Prosperie says he was injured during the June 2015 incident, during which Hegseth “negligently attempted to throw an axe at a ‘target'” during an episode of “Fox & Friends.”

According to the suit, the target “was negligently placed in an area which put pedestrians and other individuals, including the Plaintiff, in the path of peril.”

The suit further says that Hegseth was “negligent, wanton, reckless and carless [sic] in, among other things, throwing an axe in an area where he knew or should have known that pedestrians were present; in not properly securing the area, in not adequately checking to see if the area was secure; in attempting to throw an axe in public when not properly able; in attempting to throw an axe in public without proper training and in failure to properly look for pedestrians while performing a dangerous act in public.”

As a result, the suit says, Prosperie sustained “severe and serious personal injuries to his mind and body, some of which, upon information and belief, are permanent with permanent effects of pain, disability, disfigurement and loss of body function.” Prosperie’s suit says that he was also “caused to expend and become obligated for diverse sums of money for the purpose of obtaining medical care and/or cure in an effort to alleviate the suffering and ills sustained as a result of this accident.”

In a statement, Fox News told TheWrap that the incident “was unfortunate and completely unintentional,” adding that they “are reviewing” the suit.

“The incident involving Jeff Prosperie from 2015 was unfortunate and completely unintentional. FOX News immediately apologized to Prosperie and offered medical assistance, which he declined saying he was ‘okay.’ The network also offered compensation, which he declined as well,” Fox News said. “We have not heard from Prosperie since 2015, so the lawsuit is surprising and we are reviewing it.”