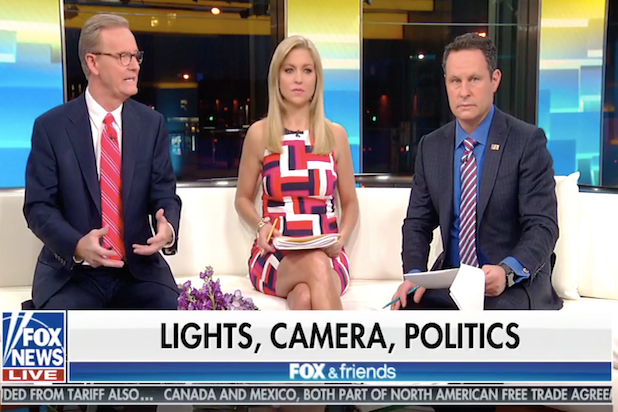 “Fox & Friends” took a victory lap on Monday after Attorney General Williams Barr concluded that the Mueller report did not find sufficient evidence of collusion or a criminal conspiracy between Donald Trump and the Russians.

On set hosts and regular guests lauded as a complete exoneration of the president. Harvard law professor Alan Dershowitz, a longtime friend of the show, trashed some of the more breathless coverage of the Mueller investigation and said a lot of apologies were owned to the American public.

“I think a lot of apologies are due to the American public about being misled by many in the media who substituted wishful thinking for factual analysis,” he said.

“This morning we wake up and the media doesn’t just have a little egg on its face, they have a whole omelette,” Doocy said. During another moment on set, he triumphantly waved around a newspaper with headlines conceding the point to Trump as well, saying the New York Times headline touting the findings “probably killed whoever had to type this in.”

On Monday, it wasn’t just “Fox & Friends” who had the knives out for the mainstream media. MSNBC — whose anchors and contributors have spent years publicly suggesting additional indictments against Trump and his family were imminent — were also facing bipartisan blowback.

“MSNBC hosts should collectively go on the air, bow their heads in shame, and apologize to the public for what they’ve done,” the Intercept co-founder Glenn Greenwald said in a tweet. “Outlets should fire the ex-CIA, NSA and Pentagon officials who used their disinformation training to help these ‘news agencies’ mislead everyone.”

“This is like Bizarro Infowars,” he wrote, linking to video of anchor Chris Hayes. “MSNBC doing all it can to help Trump win re-election in 2020.”

Reps for CNN and MSNBC did not immediately respond to request for comment from TheWrap.