Fox faced backlash this week for a tweet posted Wednesday by the account for its show “I Can See Your Voice,” which some users believed to include the use of an Asian slur.

“Do you think there’s a chink in Knight’s vocal armor?” reads the now-deleted tweet, which accompanied a short video of singer Julian Mendoza, who appeared on Wednesday’s episode of the Ken Jeong-hosted singing competition.

“On Wednesday, we posted a tweet in conjunction with ‘I Can See Your Voice’ that was inappropriate,” Fox said in a statement to TheWrap Friday. “The tweet has since been removed. We sincerely apologize to the Asian community and to all whom it offended.”

The tweet was sent from the Fox singing competition’s official account during Wednesday’s show, in which Mendoza was featured as one of this week’s six “Secret Voices” hiding whether they had a “good” or “bad” singing voice. Contestants had to identify them with the help of celebrity panelists Pat Monahan, Yvette Nicole Brown, Bob Saget, Cheryl Hines and Adrienne Houghton.

Here’s a screenshot of the tweet, which was taken down Friday morning. 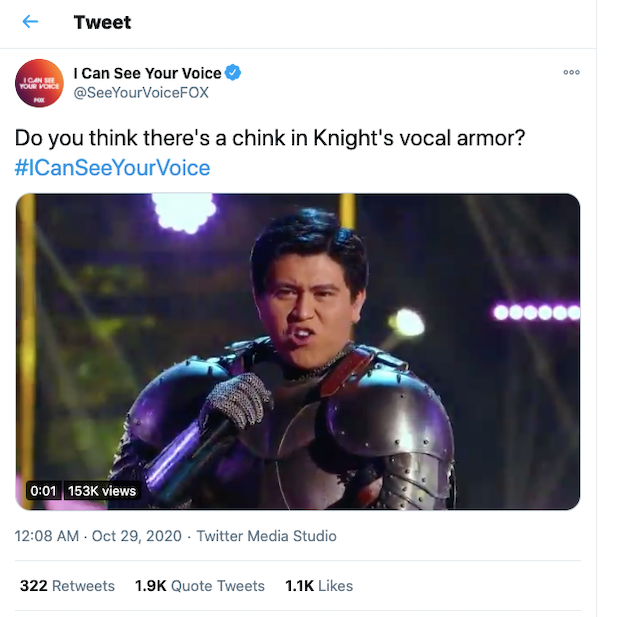 “Raising awareness on this was my night because you are representing wrongly. And I was enjoying your show,” one user commented on the tweet.

“I know they mean that the armour might be vulnerable, but using that word was a poor choice at that moment,” another wrote.

A different tweeter said: “UHM???????? I never thought I’d have to report a network show account for hate speech but–”

Representatives for Fox did not immediately respond to TheWrap’s request for comment Friday.

Also Read: 'The Masked Singer' Reveals Another Celebrity Contestant: And the Lips Are... (Video)

“I Can See Your Voice” features, “a rotating panel of celebrity detectives, comprised of comedians and pop culture experts, and a musical superstar to help one contestant tell the difference between good and bad singers, without ever hearing them sing a note,” per Fox. “With $100,000 on the line, the contestant will attempt to weed out the bad ‘Secret Voices’ from the good, based on a series of clues, interrogation and lip synch challenges. In the end, the singer whom the contestant picks will reveal if they are good or bad in a duet performance with the musical superstar, resulting in an amazing musical collaboration or a totally hilarious train wreck.”

The series is produced by Fox Alternative Entertainment. James McKinlay, Craig Plestis and Jeong serve as executive producers. The series is based on a South Korean format from CJ ENM.

And the fact that the show was adapted from Korea, like really you had to use this word? With an Asian host, @kenjeong?

I know they mean that the armour might be vulneable, but using that word was a poor choice at that moment.

This is unacceptable. Please delete this

UHM???????? I never thought I'd have to report a network show account for hate speech but–

This is disgusting and sad. Do better. This is racism. You know it. It’s blatant.

I’d reconsider that wording. I mean, I know it’s a saying, but… pic.twitter.com/KgoDa1H1KP

Please consider the effects your words can have, and delete this. Do better.

Delete this at once. It’s appalling. It’s disgusting. You’re better than this.