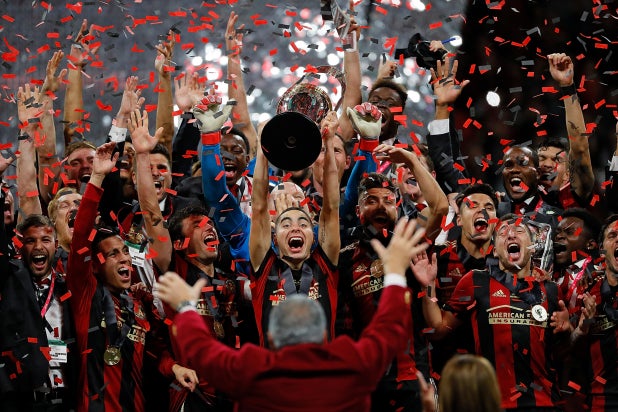 Fox netted a strong showing for its coverage of the 2018 MLS Cup, which saw Atlanta United defeat the Portland Timbers on Saturday.

The match, which was played in front of a record Major League Soccer crowd of 73,019 at Atlanta’s Mercedes-Benz Stadium, drew 1.56 million viewers, the most to watch any prior MLS Cup since 1997, according to Nielsen media research.

That’s viewership increase of 91 percent over last year’s match, which didn’t even crack 1 million viewers (819,000). On Fox Sports streaming sources, the match pulled in an average minute audience of 23,212, ranking as Fox Sports’ most streamed MLS event ever.

Fox has made a big bet on soccer in recent years, having aired its first Men’s World Cup this past summer from Russia, which struggled in the ratings without the United States’ failure to qualify for the tournament.

Fox drew 11.3 million TV viewers for its coverage of the championship, which saw France defeat Croatia 4-2. But that was down 20 percent from the 14.1 million that watched ABC’s coverage in 2014 of Germany’s 1-0 win over Argentina. Those numbers include the pre- and post-match coverage, which can deflate the overall viewership. Leading up to the title match, Fox had been trending nearly 40 percent lower than 2014’s average viewership, so the final closed the gap a bit.