Fox News reporter Benjamin Hall said he feels “pretty damn lucky to be here” in his first social media posts since March, when he was injured in an attack while covering the Russian invasion of Ukraine.

Hall also provided the first horrifying details about just how seriously his injuries were, and paid tribute to his two colleagues who were killed in the attack.

“Its [sic] been over three weeks since the attack in Ukraine and I wanted to start sharing it all,” Hall said on Twitter. “But first I need to pay tribute to my colleagues Pierre and Sasha who didnt make it that day. Pierre and I traveled the world together, working was his joy and his joy was infectious. RIP.” 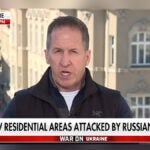 In a follow up tweet, which also included a photo showing that he now wears an eye patch, Hall continued: “To sum it up, I’ve lost half a leg on one side and a foot on the other. One hand is being put together, one eye is no longer working, and my hearing is pretty blown… but all in all I feel pretty damn lucky to be here – and it is the people who got me here who are amazing!”

Hall, along with Fox war zone photo journalist Pierre Zakrzewski, 55, and Ukrainian journalist Oleksandra Kuvshinova, 24, were just outside of Kyiv on March 14 when the vehicle they were in was struck by incoming fire. Zakrzewski and Kuvishinova were both killed in that attack and Hall, who barely survived, was evacuated out of Kyiv shortly after. He was eventually transferred to a hospital in Texas.

Since March 25 he has been in the Texas hospital recovering from multiple, extensive surgeries, the nature of which remained unknown until Thursday.