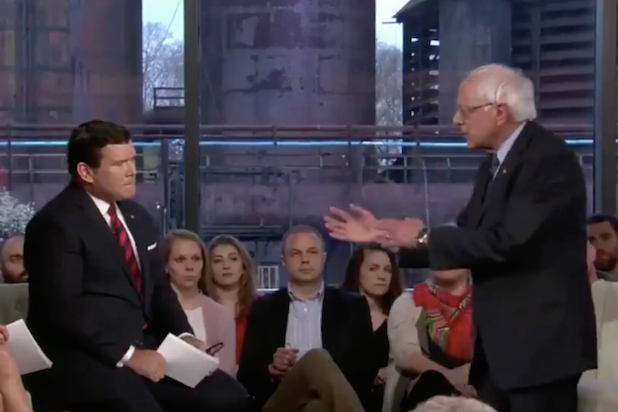 The event was a big win for the cable news channel, which is currently facing a boycott from the Democratic National Committee banning the right-leaning network from hosting any 2020 primary debates.

Fox News’ hard news stalwarts Bret Baier and Martha MacCallum hosted the forum, which went off without a hitch — but the tensions between President Trump’s favorite news channel and one of the most progressive voices in the Democratic field still managed to produce a number of surprising moments.

Also Read: Fox News Rebuked by DNC Chief During Fox News Interview: 'I Don't Have Faith in Your Leadership'

1. Viewers Cheer Medicare for All

Fox News anchor Bret Baier took a bit of a risk when he asked town hall attendees whether they would be willing to transition from private medical insurance to a public “government run” option that is currently being championed by Sanders (and many other Democratic candidates).

“How many are willing to transition to what the senator says, a government-run system?” Baier asked.

The line drew cheering and was an early indicator that the audience was with Sanders on the issue — something they demonstrated on many other occasions that evening.

Baier’s co-anchor for the evening, Martha MacCallum, came in for booing from the audience later on after a testy exchange with Sanders about the possibility of allowing incarcerated felons the right to vote.

“One of the things that upsets me very much is we have cowardly Republican governors who are working overtime to suppress the vote, to make it harder for people of color, for poor people, for young people, to vote,” Sanders said. “Every American 18 age or older, who is a citizen in this country, has the right to vote.”

“Couldn’t they say the same thing about you, that you just want felons to vote because it will be better for you?” MacCallum shot back — which prompted the booing.

Early on in his town hall, Sanders noted that many on his side didn’t want him to come on Fox News and while he took a light touch with audience members, he was frequently prickly with his Fox News hosts, never missing an opportunity to jab at their employers.

Eventually, Bret Baier had enough. “We are very grateful that you’re here,” he said. “We are giving you an hour of substance and talk on our airwaves so we can get over the Fox thing, if you’re all right with that.”

The moment came after Sanders laced into all media coverage for focusing too much on individual candidates and not enough on ideas. “This is not just Fox,” he said. “I go out and I listen to the people and they ask me questions. Those questions are often very, very different than the questions being discussed by media and Capitol Hill.”

No doubt aware that President Trump is never far from the Fox News channel, the Vermont senator used some of his time to speak to the billionaire directly. “The president watches your network a little bit, right?” Sanders said. “Hey, President Trump, my wife and I just released 10 years [of tax returns] — please do the same. Let the American people know.”

The moment came during a discussion of taxes and whether Sanders’ could be an effective messenger for his movement since he was personally a millionaire.

The president weighed in on Tuesday, dodging the tax challenge and calling the event “weird.”

5. That it Happened at All

After the New Yorker dropped a lengthy story documenting the closeness between President Trump and Fox News last month, the Democratic National Committee announced it would not allow the network to host any 2020 Democratic primary debates. The decision came as a blow for Fox News as it looks to burnish its hard-news credentials. The channel has not hosted a Democratic presidential primary debate since 2004.

“Recent reporting in the New Yorker on the inappropriate relationship between President Trump, his administration and Fox News has led me to conclude that the network is not in a position to host a fair and neutral debate for our candidates,” DNC chief Tom Perez said. “Therefore, Fox News will not serve as a media partner for the 2020 Democratic primary debates.”

The DNC decision came as Fox New hosts face an extended advertiser boycott led by liberal watchdog group Media Matters and other activists which that have left primetime shows with few big name sponsors. By appearing on the network, Sanders chose to buck the prevailing wisdom of his far-left allies and give Fox a big credibility boost.