Fox News host Sean Hannity unleashed fire and fury against comedian Jimmy Kimmel during a more than 20-minute opening monologue of his Friday show, but viewers who wanted to check it out online are out of luck, as the network chopped the entire segment from their web broadcast.

Fox News catalogs Hannity’s show in full for the web — complete episode can be seen here.

Removing the lengthy monologue and a subsequent segment on Kimmel with fellow Fox News host Judge Jeanine Pirro resulted in a web broadcast of just 20 minutes and 13 seconds, less than half the time of other episodes of “Hannity” viewable on the same page. 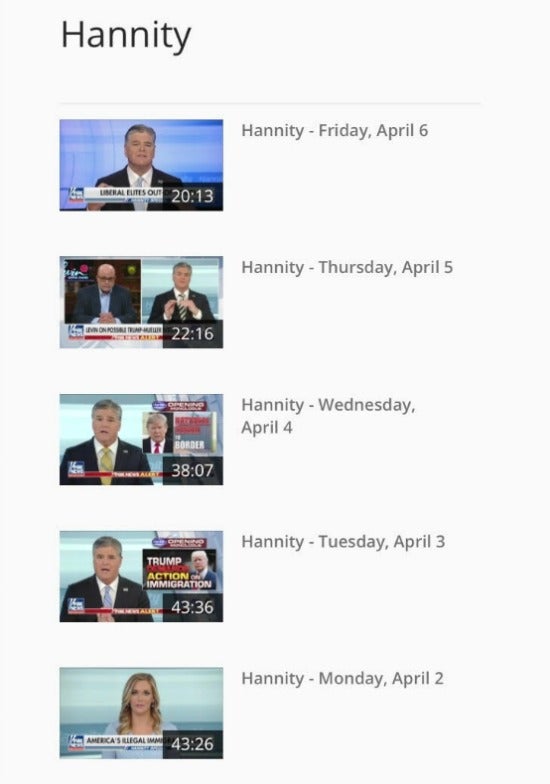 The network also removed the opening monologue from Thursday’s show, while opening monologues were available for the Wednesday and Tuesday shows. The monologue — as Fox viewers traditionally know it — was not aired Monday with Fox News host Katie Pavlich filling in for Hannity that night. A link to “load more” episodes was not working Saturday evening.

It is unclear what motivated the Thursday and Friday redactions. Both Fox News reps and Hannity did not immediately respond to inquiries from TheWrap.

Hannity has been feuding with Kimmel all week after the comedian mocked Melania Trump’s accent while she read to children at the annual White House Easter Egg roll. As the Friday show approached, Hannity promised it would be a “must see” TV torching.

When the big moment did arrive — Hannity delivered.

“We’re going to fight fire with fire. We will show you video proof of Kimmel’s creepy,  perverted, misogynistic and even racist past and that is tonight’s breaking news opening monologue,” said Hannity. Much of that proof consisted of old footage during Kimmel’s days hosting “The Man Show” on Comedy Central.

In addition to the montage of lowbrow humor, Hannity continued to refer to Kimmel as “Harvey Weinstein Jr.” — a sobriquet he has pinned to the comedian all week.

Kimmel, for his part, has not been taking the Hannity onslaught lying down, responding tit-for-tat with him on Twitter — most infamously suggested he was the receptive partner in a relationship with Trump.

“Don’t worry – just keep tweeting – you’ll get back on top! (or does Trump prefer you on bottom?) Either way, keep your chin up big fella,” said Kimmel. “When your clown makeup rubs off on Trump’s ass, does it make his butt look like a Creamsicle?”

Don't worry – just keep tweeting – you'll get back on top! (or does Trump prefer you on bottom?) Either way, keep your chin up big fella..XO https://t.co/R4QJCoGYCL

When your clown makeup rubs off on Trump’s ass, does it make his butt look like a Creamsicle? https://t.co/DEhmfOh0Hn