Fox News host Harris Faulkner defended Roseanne Barr on Tuesday, saying that the comedian exercised her right to free speech in a tweet likening former Obama administration adviser Valerie Jarrett to “The Planet of the Apes.”

“I don’t understand it to be anything other than free speech,” said Faulkner on the set of “Outnumbered Overtime” on Tuesday. “It is extremely offensive but it is just that. She says in one of her tweets, there were three rapid-fire today, where she says, ‘Well, it was a joke. It was a miscalculated joke.'”

“She is a comedian,” said Nikpour. “She does have a very wicked, twisted sense of humor. Everybody knows her to be a little raunchy and a little rough.”

Barr later apologized for the joke, agreeing it was in “bad taste” and deleted the tweet.

Faulkner’s defense of Barr comes on the same day that ABC canceled the hit revival of the comedian’s sitcom following the tweet. The news came down from ABC Entertainment chief Channing Dungey, who announced the cancellation of the network’s biggest show in a terse statement Tuesday.

“Roseanne’s Twitter statement is abhorrent, repugnant and inconsistent with our values, and we have decided to cancel her show,” he said.

The original tweet from Barr seemingly came out of nowhere and was in response to an article from a fringe website claiming that the Obama-era CIA has been spying on the President of France.

“muslim brotherhood & planet of the apes had a baby=vj,” said Barr in the tweet which has now upended her career. 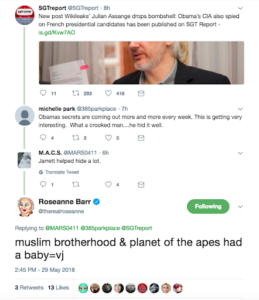 In addition to the loss of her show, Barr was also dropped by her talent agency, ICM Partners.

“We are all greatly distressed by the disgraceful and unacceptable tweet from Roseanne Barr this morning,” agency chiefs said an in an internal staff memo on Tuesday. “What she wrote is antithetical to our core values, both as individuals and as an agency. Consequently, we have notified her that we will not represent her. Effective immediately, Roseanne Barr is no longer a client.”

In addition to her apology, Barr said she was leaving Twitter.