During an appearance on Fox News’ “The Five” over the weekend, Guilfoyle addressed a recent tweet by Bow Wow, in which he defends Dogg’s right to bash Trump in the music video for “Lavender,” while going after the First Lady. 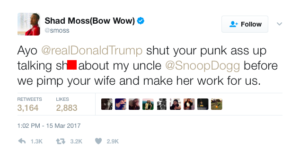 Guilfoyle was asked what the Secret Service should do about it. “Kill them,”
she responded. “I think it would be fantastic if Snoop and wannabe-Snoop got a visit from, like, the federal marshals, and let’s see how tough and gangster they are then.”

Gutfeld: What should the Secret Service do [about the threats made by Snoop Dogg and Bow Wow]?
Guilfoyle: Kill them. Kill them. pic.twitter.com/j7iovt5kNA

“Lavender” has received a lot of criticism from Trump supporters including Marco Rubio, who said Dogg “shouldn’t have done that.” “We’ve had presidents assassinated before in this country, so anything like that is really something people should be very careful about,” he told TMZ.

In the video for “Lavender,” directors Jesse Wellens and James DeFina depict an America where everyone’s a clown, including president “Ronald Klump.” After Klump holds a press conference to announce the deportation of all dogs, Snoop chains up the Clown-in-Chief and shoots him with a fake pistol.

Trump condemned the video on Twitter, slamming Dogg as a “failing” rapper.