Michael Jackson’s personal physician Dr. Conrad Murray will be charged with manslaughter within the next two weeks, a law enforcement source told FoxNews.com.

Murray could be arrested as early as next Wednesday, the individual said. Meanwhile, investigators are executing another search warrant next week — potentially at a Los Angeles pharmacy — to gather more evidence for their case against him.
Jackson’s dermatologist Dr. Arnold Klein also will face criminal charges related to medical malpractice, the law enforcement source told the website. That arrest, however, won’t occur for at least another two weeks. 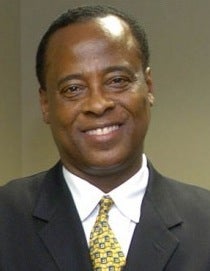 The Los Angeles County District Attorney’s office denied that prosecutors will be charging the two physicians.
"Until police complete their investigation and bring it to our office, there is no way to know what charges may be filed and against whom," the office’s spokeswoman Jane Robison told the site.

Despite the denials, the same individual in the law enforcement field said that investigators are currently talking to the DA’s office and trying to figure out how to arrest Murray.

They may give him the option of surrendering in Los Angeles, or he could be arrested in Houston, where he currently lives.

Investigators also apparently wanted to charge Murray with a more serious crime than manslaughter, but prosecutors worried a jury may not convict without one, the site said.

Numerous outlets have reported that Murray admitted to giving Jackson the intravenous anesthetic Propofol to help him sleep on the eve before his death on June 25. Klein, the dermatologist, has said he gave Jackson the painkiller Demerol, but not Propofol.
Murray posted a video on YouTube Tuesday thanking the friends and patients who have supported him throughout the investigation. In the video, he said he has not been able to check his e-mail or return phone calls because of death threats.
x
Looks like you're enjoying reading