“Congresswoman Bush said two really dumb things,” Watters said. Emboldened, he continued: “She says this land was stolen. This land wasn’t stolen. We won this land on the battlefield and we bought it, right? We purchased Spain – I mean we purchased Florida from Spain. We have the receipts. What, do you want to give Florida back to Spain?”

Then, his fellow co-host, journalist and political commentator Geraldo Rivera, inquired about the Seminole, Apache and Navajo Tribes – populations of Indigenous people displaced and devastated by Spanish settlers and English raiders.

“Well, what about them, Geraldo?” Watters replied, sharply. “We won that territory on the battlefield. It was an ugly, brutal battle, but we won it. We’re not just gonna give everything back to the indigenous people of this country.” 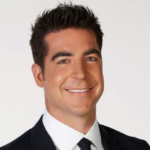 Watters went on to attack Congresswoman Bush’s point about Black people not being “free,” retorting that Bush represents St. Louis, a city that – as Watters passionately pointed out – has a Black police chief, mayor, deputy attorney and congresswoman.

“So are you saying these Black leaders are denying freedom to the Black people of St. Louis? That’s insane,” Watters said.

The commentator, in true fashion, concluded the segment by saying that if he and Congresswoman Bush went out to dinner, she’d “like” him. 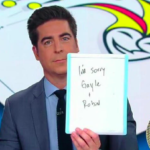 And while that’s up for debate, the historic oppression and genocide of Indigenous populations isn’t. According to a 2016 report, 10 million Indigenous people lived in the present-day United States in 1492, the year of Christopher Columbus’s arrival. By 1900, there were less than 300,000 Indigenous people. In later years, there was the forced removal of Native people from their homes with the Indian Removal Act, a mass killing of Native people – which is now remembered as the Trail of Tears – and countless other injustices and acts of violence against Native populations.

Watch video of Watters’ take on Fox News at the top of this story.