The death of Michael Jackson has been an economic stimulus for cable news networks feeling the decline of Obama-mania in a post-election year.

Everyone from Nancy Grace to Geraldo to Larry King to Keith Olbermann has jumped into a wall-to-wall, flood-the-zone media strategy  since the international pop star died on Thursday, June 25.

But for news networks CNN and MSNBC, it has been a temporary help that hasn’t altered the basic landscape, where Fox News still reigns supreme.

All three of the main players — Fox News Channel, CNN and MSNBC — bested their viewership average by far with their first day of Jackson coverage less than two weeks ago, but only Fox has managed to retain most of those viewers.

This reflects a growing trend, as Fox has become not only the top-rated cable news network, but also the third most-watched channel in all of cable.

CNN, once the titan of the industry, has recently still drawn the largest audiences for specific events like the 2008 Presidential election, but that has not helped it rival Fox in overall viewership.

With Jackson, CNN surged to the top of the charts on June 25 — the day of his death — recording the most total viewers throughout the day and particularly during prime time, according to Nielsen.

Yet, though CNN carried some of this success into the weekend, by the following week it performed the worst of the three networks. It retained just 59 percent of its viewers on Monday and Tuesday, and 38 percent in prime time. 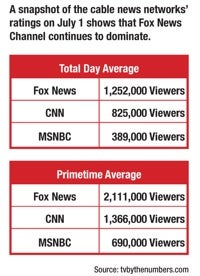 In response to these numbers, a CNN spokesperson said: "CNN experienced the largest ratings increase of any cable news network during the recent breaking news. The networks that didn’t attract viewers are obviously seeing less of a decline — they cannot be satisfied not to have grown as much as CNN."

Miles O’Brien, a former CNN news anchor, had a different take on the situation.

“I think what Fox has probably figured out is that you need to program and you need to program with personalities that people want to listen to even when the world is not falling apart,” O’ Brien said. “CNN has historically been a victim of this. It has risen and fallen directly (with) world events.”

And in the wake of Fox’s success with recent event coverage, some even question whether CNN remains the primary destination for breaking news.

If CNN loses that battle, “then CNN has some problems, because that is their wheelhouse,” O’Brien said. “If they lose that then all bets are off.”

CNN’s recent performance mirrors what has occurred since the presidential election, as CNN and MSNBC have seen a precipitous decline in ratings while Fox News has remained steady.

With Democrats dominating the White House and Congress, this divide has been most prominent in primetime, where Fox often draws more viewers than CNN and MSNBC combined, according to tvbythenumbers.com.

Of CNN’s prime time shows, Anderson Cooper 360 has lost nearly 50 percent of its audience from the last quarter of 2008 through this year’s second quarter while Campbell Brown has lost 37 percent. Among viewers 25-54, the losses steepen to 59 and 48 percent, respectively.

With Brown and Anderson both down from a year ago, CNN has yet to reap benefits from its efforts. Meanwhile, Fox News’ programs have surged in 2009, as even stalwarts such as Bill O’Reilly have seen a boost in ratings. As has the nightly re-airing of his show.

On July 1, "The O’Reilly Factor" scored 2.5 million viewers, while Campbell Brown just squeezed past 1 million. The audience size is indicative of the routine dominance Fox News Channel displays, despite early discussion that since Obama was a Democrat, the network may lose some of its audience. Instead, it’s maintained it.

“The media that is going to get the most attention is not the apologist for the administration,” said Marc Germain, a Los Angeles-based radio talk show host. “Fox did a good job of creating an us versus them mentality."

Fox News is on pace for its best year ever and also boasts all ten of the highest rated programs in cable news. CNN, meanwhile, posted its best June in history, but lost to MSNBC in primetime for the first time ever in the second quarter.

Both Cooper and Brown represent an effort to bring in personalities to discuss the news, something Fox has tried since it started.

“[Fox] did a good job of creating personalities whereas CNN tried to be more generic in their delivery of news,” Germain said.

“It’s active and it’s engaging,” O’Brien said. “Its really well-done TV, which thinks about the audience and having a conversation with the audience.

MSNBC’s primetime fare, featuring hosts like Keith Olbermann and Rachel Maddow, has also declined sharply since the election, but the network has posted improved numbers over the same period in 2008.

For O’Brien, the success of more opinionated commentators has been disconcerting.

“The politics, the point of view is assumed to be a part of everything you hear now,” he said. “As a result, nothing is taken at face value.”

Still, while a CNN alum may dislike Fox’s methods, no one denies its success. “People remember personalities,” Germain said. “They don’t remember stories by correspondents in Africa. They are much more likely to respond to people they can relate to.”