Fox News contributor Keith Ablow came under fire on Monday from a prominent historian who called his remarks about guns and the Holocaust “reckless and wrongheaded.”

Leonard Steinhorn, a history professor at American University in Washington, D.C. and a political analyst for CBS News, said Ablow’s op-ed in support of Republican presidential candidate Ben Carson’s claim that armed Jews could have prevented the Holocaust was irresponsible.

“It would be nice if TV personalities took their responsibilities seriously and examined the history before making reckless and wrongheaded statements, particularly about the Holocaust,” Steinhorn told TheWrap as he took aim at Ablow’s FoxNews.com article titled “Why Ben Carson is right about Jews, the Holocaust and guns.” 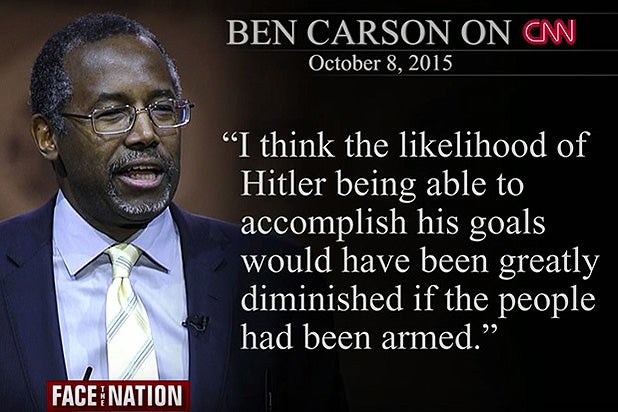 “Ablow is clearly a gun ideologue and wants everything to fit into his neat little mindset about firearms,” said Steinhorn.

Steinhorn, who co-authored a book about race relations in America titled “By the Color of Our Skin: The Illusion of Integration and The Reality of Race,” said Ablow’s comments that armed Jews could have fought back against the Nazis were out of touch.

“What he says has no relationship to what European Jews faced in those terrible years,” Steinhorn explained. “Does Ablow really think that everyday Jews — teachers, children, small business owners, grandparents — would have had a chance?”

Also Read: Message to Ben Carson: Get Educated on the Holocaust or Drop the Hell Out

Ablow, who says he’s studied the Holocaust at length, wrote that Jews didn’t just surrender their guns, but they “demonstrated intention, at all costs, to resist being deprived of liberty.”

Steinhorn pointed out that this argument flies in the face of history. “Even well-armed Nazis, the brutal brown shirts of the SA, were purged and murdered by Hitler’s ruthless troops.”

Steinhorn also admonished Ben Carson to stop making incendiary statements, and for the media to stop paying attention to him.

“Carson has a history of making intemperate and ill-informed statements. Shame on the press for covering only the horse race and not constantly reminding us of the more outrageous statements some candidates make — and what that says about their worldview.”

Fox News did not respond to TheWrap’s request regarding  Ablow’s op-ed.