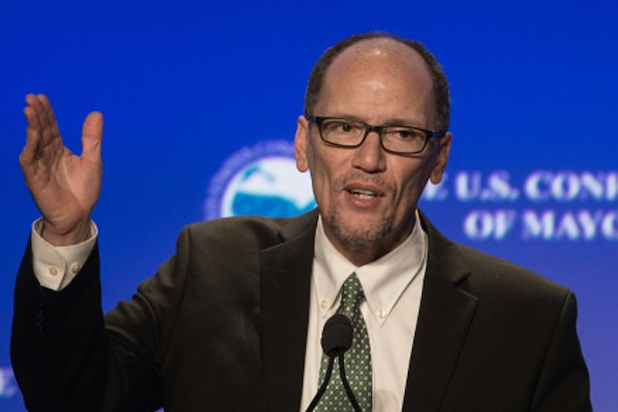 Responding to Hemmer’s question about why Democrats refused to allow a 2020 presidential primary debate on the network, Perez bluntly said that he did not have “faith” in the channel’s leadership.

“Here is why we won’t do that, because I don’t have faith in your leadership at Fox News at the senior levels,” he said .”I have great respect for Bret [Baier] and for Chris [Wallace] and for you, but you’ve demonstrated that above your pay-grade, they don’t trust your own listeners and so they feel like they have to put the thumb on the scale.”

Also Read: Tucker Carlson Asks 'How Did We Wind Up With a Country in Which Feminists do Science?' (Video)

Hemmer asked if Perez would name names, but the DNC boss declined the opportunity and repeated his discomfort with “senior leadership” at Fox News. “They have pierced that line between editorial and your Sean Hannity shows,” he said.

The Fox News anchor pushed back on Perez and insisted that the network — like any newspaper — maintained a strict wall between its editorial programming and hard news.

“You know there is a line between what we do at 9:00 o’clock and what happens in the prime time,” he said. “It’s like reading a newspaper, Tom. And it has been the same way for a long time. I really hope you come back and I really hope you reconsider. We’ll give you a fair shake.”

The exchange suggests that the DNC won’t allow Fox News to host a 2020 primary debate. The channel last aired Democratic candidate debate in 2004. The breaking point for Democrats came after the publication of a New Yorker piece which documented the closeness between the network and Trump White House.

“Recent reporting in the New Yorker on the inappropriate relationship between President Trump, his administration and Fox News has led me to conclude that the network is not in a position to host a fair and neutral debate for our candidates,” Perez said in a statement last month. “Therefore, Fox News will not serve as a media partner for the 2020 Democratic primary debates.”

The network responded at the time promising it would be fair and urged Perez to reconsider.

“We hope the DNC will reconsider its decision to bar Chris Wallace, Bret Baier and Martha MacCallum, all of whom embody the ultimate journalistic integrity and professionalism, from moderating a Democratic presidential debate,” it said. “They’re the best debate team in the business and they offer candidates an important opportunity to make their case to the largest TV news audience in America, which includes many persuadable voters.”