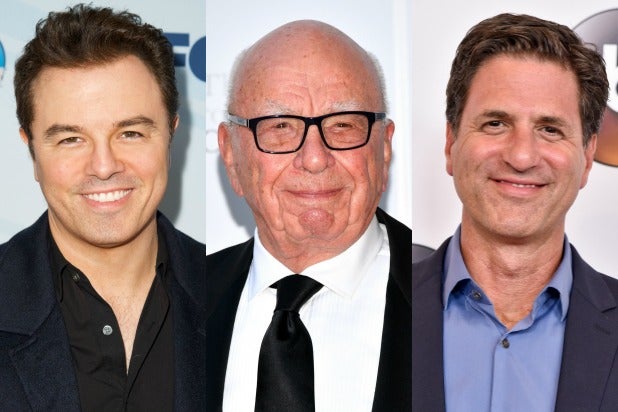 There’s a family feud at Fox, with TV studio creatives like “Modern Family” co-creator Steve Levitan and “Family Guy” creator Seth MacFarlane tweeting their fury at their parent company over Fox News’ coverage of family separations at the U.S.-Mexican border.

21st Century Fox’s assets include the Los Angeles-based film studio, 20th Century Fox, and the Fox broadcast network that is the home to shows like “The Simpsons,” as well as the New York-based Fox News, home to conservative commentators like Laura Ingraham, Sean Hannity and Tucker Carlson.  Some of the West Coasters are loudly taking issue with the hosts’ spin on child immigration centers.

The fight comes as 21st Century Fox executive co-chairman Rupert Murdoch is selling off Fox’s TV and film assets, so they will no longer be affiliated with Fox News. That may free Levitan, whose contract is ending and whose show airs on ABC even though it comes from Fox’s TV studio, 20th Century Fox TV. MacFarlane will remain connected because he produces shows that air on Fox.

The breakup may explain why Levitan and MacFarlane “probably feel a little more free” to speak out, according to Brad Adgate, an independent media consultant and former senior vice president at Horizon Media.

“I don’t think this would’ve happened a year ago,” Adgate told TheWrap. “Fox News has always been partisan.”

Levitan and MacFarlane’s success has also bought them some freedom.

“Someone who doesn’t have a name or just started out wouldn’t say this,” Adgate said. “These guys are so successful as TV producers that they can go anywhere else if suddenly Fox said, ‘We don’t like what you said, we’re going to drop you.'”

Also Read: Steve Levitan Will 'Take Some Time' to Decide Future With Fox

The showrunners aren’t the first powerful Fox broadcast icons to lash out at Fox News. “The Simpsons” has made a running gag of it. For the show’s 25th anniversary on Fox in 2012, the show ran a love note to Fox, with an asterisk that read “This doesn’t include Fox News.”

Levitan tweeted Tuesday morning that he would leave the studio after “Modern Family” finishes its run. He then backtracked slightly, saying that he would “take some time” to think about his future and see where top Fox executives end up after the company is sold. (It is expected to go to either Disney or Comcast.)

“In other words, don’t think critically, don’t consult multiple news sources, and in general, don’t use your brain,” MacFarlane tweeted. “Just blindly obey Fox News. This is fringe s—, and it’s business like this that makes me embarrassed to work for this company.”

Others who spoke up include Adam Scott, star of Fox’s “Ghosted,” who said that “as a ⁦FOX employee I’m disgusted by ⁦@FoxNews⁩ and their support for & blatant lying about state-sponsored child abuse.”

“Ghostbusters” director Paul Feig tweeted that he has made two films for 20th Century Fox and loves “the people in the movie and TV divisions.”

Be he added: “I too cannot condone the support their news division promotes toward the immoral and abusive policies and actions taken by this current administration toward immigrant children.”

Fox News Channel, Fox Broadcast Channel, and 21st Century Fox corporate all declined to comment on this story. The Fox studio did not respond to requests for comment.

Robert Thompson, director of the Bleier Center for Television & Popular Culture at Syracuse University’s Newhouse School, said Levitan and MacFarlane “feel secure enough that a punitive firing by Fox for saying that is probably not very likely… They thought they were treading on thick ice.”

Thompson pointed out “there has always been” a divide between those two sides of the business.

“Fox News has shown stuff that you would never expect the Fox Network to show,” he said.

Unlike other broadcasters, Fox doesn’t tout its news division during the spring upfront presentations to advertisers.

Fox News is arguably the largest jewel in 21st Century Fox’s crown. That — and the fact that Disney has ABC News — is why Fox News was never even a consideration in the sale of Fox’s assets to Disney. Fox News doesn’t need the support of any other property.

It has been the most-watched cable news channel in both primetime and total-day measurements for a staggering 197 months. And across that 24-hour period, Fox News has topped all of basic cable for 23 straight months — almost two years. Last month, its mighty primetime lineup was second only to TNT.

Despite cord-cutting and a general downward trend in ratings, SNL Kagan expects Fox News will net about $92 million more this year than last year. By 2020, it believes FNC’s positive cash flow will be $223 million more than in 2017.

While Levitan may be able to head for the exit door from Fox soon, MacFarlane, even after the sale goes through, will still very much be in business with Fox. His long-running “Family Guy” and live-action dramedy “The Orville” will both return on Fox next fall, as will the “Cosmos” event series follow up “Possible Worlds,” which MacFarlane executive produces.

“The reason it’s happening now is that we’re now far enough into the major cultural changes that began in 2015, when the last election came,” Thompson said. “The number of things like this that Levitan and McFarlane are outraged about are accruing and building up, and the kinds of things that are being said on Fox News are reaching new plateaus.”

In other words, don’t think critically, don’t consult multiple news sources, and in general, don’t use your brain. Just blindly obey Fox News. This is fringe shit, and it’s business like this that makes me embarrassed to work for this company. https://t.co/kC7MPYxdgZ

Let me officially join @SethMacFarlane in saying I’m disgusted to work at a company that has anything whatsoever to do with @FoxNews. This bullshit is the opposite of what #ModernFamily stands for. https://t.co/dnvIbgoIyA

I look forward to seeing #ModernFamily through to the end and then, sale or no sale, setting up shop elsewhere.

I have made two films for 20th Century Fox and love the people in the movie and TV divisions. But I too cannot condone the support their news division promotes toward the immoral and abusive policies and actions taken by this current administration toward immigrant children. https://t.co/6JqIQPjepV

As a ⁦FOX employee I’m disgusted by ⁦@FoxNews⁩ and their support for & blatant lying about state-sponsored child abuse. https://t.co/r6gkqHQDzq