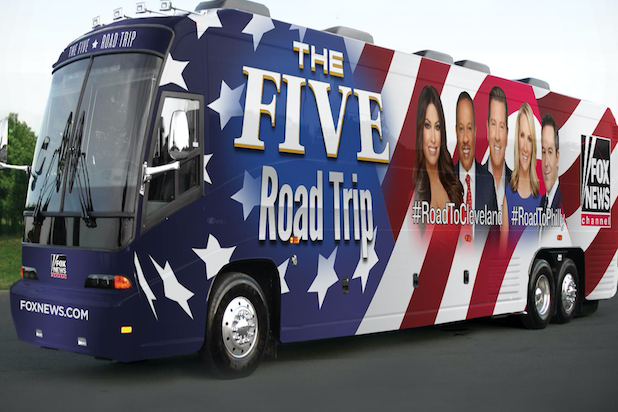 The hosts of Fox News Channel’s “The Five” will a take a bus from New York City to Cleveland for the GOP convention, and it’s not because Roger Ailes is cutting costs.

This summer Eric Bolling, Kimberly Guilfoyle, Greg Gutfeld, Dana Perino and Juan Williams will travel to the Ohio city, as well as Philadelphia, in a giant bus adorned with portraits of their respective faces.

The bus departs from New York on July 15 and will make various stops along the way before disembarking in Cleveland for the highly anticipated Donald Trump Show, ahem, Republican National Convention.

But the tour doesn’t end with the official crowning of the Republican nominee for president. From there the hosts of “The Five” will pile back into the bus and head to Philadelphia for the Democratic National Convention the following weekend.

The show will be broadcast on location from various parts of the country each day while the crew is on the road, and viewers can follow their adventures by searching the hashtags #RoadtoCleveland and #RoadtoPhilly on social media. The co-hosts are also expected to use Facebook Live to capture behind-the-scenes moments.

“The Five” is one of the most popular shows in cable news, ranking No. 1 in its 5 p.m. ET time slot for nearly 60 consecutive months, according to Nielsen.