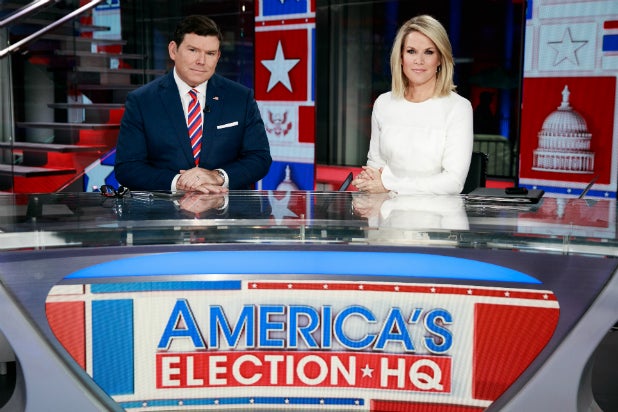 Fox News Channel was No. 1 in total viewers for Tuesday night’s midterm election coverage, when all of cable news — and most of broadcast — programming was halted for race results. Fox News even beat each of the broadcast nets outright.

CNN finished first in the key news demo, however, which encompasses adults 25-54. Fox News was second by that metric, according to Nielsen. MSNBC was third in cable news’ primetime results in both main Nielsen metrics, though it fared a little better in total viewers than CNN did earlier in the evening.

Isolating just broadcast, it was NBC topping ABC outright to finish No. 1 among the over-the-air channels. CBS came in a pretty distant third.

Below is how primetime (8 p.m. ET – 11 p.m. ET) shook out among all six of the main players. The networks are ranked by total viewers and listed in descending order.

Obviously the demo rankings would be a bit different.

And here is how cable news looks if one chooses to include the 6 and 7 p.m. hours, which are when polls closed and results began coming in.

Viewers of the conservative-leaning Fox News Channel are probably pretty happy with how the Senate seats worked out. Not so much on that big House of Representatives loss for Republicans.

“Today is the perfect day to do your part — all you have to do is VOTE!” says photographer Elisabeth Caren

Shooting some of the powerhouse participants in TheWrap's Power Women Summit, photographer Elisabeth Caren wrote: "It is my hope that these images, photographs from the past of courageous women who had worked tirelessly and risked everything to get us where we are today, projected onto the fearless women who are doing the hard work to keep the equality movement progressing, will inspire us all to do our part to keep the movement moving forward every day. And today is the perfect day to do your part -- all you have to do is VOTE!"