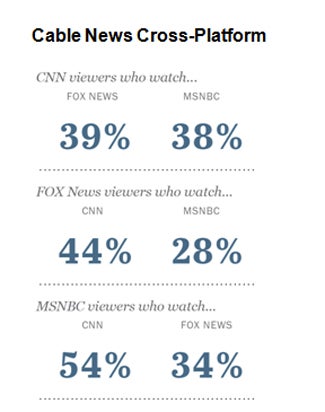 The cable news wars have a few double agents in their midst. According to Pew’s latest study on how Americans watch TV news, some Fox News viewers also watch MSNBC — and vice versa. An even larger percentage of both audiences also watch CNN.

According to Nielsen data prepared for Pew’s study, about a third of people who watched MSNBC also watched Fox News, while just over half of them also watched CNN.

CNN also topped the viewership levels — 20 percent of American adults while Fox News had 18 and MSNBC had 14 — but lags behind Fox News in the ratings because those viewers aren’t watching its scheduled programs like they are Fox News'; that is, there wasn’t enough “appointment viewing.”

The data’s from February 2013, when CNN CEO Jeff Zucker was just a month into his reign. He’s since put several new shows in CNN’s lineup; perhaps the channel will fare better as an appointment viewing destination in future studies.