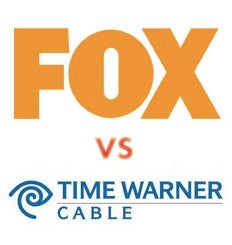 Fox and Time Warner Cable agreed just after midnight to extend the contract a few hours to avoid the New Year’s Day blackout. By 10 a.m. PT they were still negotiating.

As of 12:30 a.m. PT, Fox remained on TWC systems. A spokesman for the network said both sides were still talking. Check back in the morning for another update, should events warrant.

Viewers of Time Warner Cable in Manhattan report seeing an ad from the cable giant declaring a done deal. Reps for both camps call it "a mistake." Details over at TV MoJoe.

The midnight EST deadline passed with no resolution to the fees dispute between News Corp.’s Fox and Time Warner Cable, but negotiations continued into the night and Time Warner subscribers continued to receive the top-rated network — a sign that the sides were making progress.

Millions of Americans face the loss of Fox channels with the new year, including a number of top sports events on Friday. Fox is scheduled to air National Football League games, as well as college football’s Bowl Championship Series.

Federal Communications Commission Chairman Julius Genachowski issued a statement late Thursday afternoon chiding Fox and Time Warner for letting the dispute drag on to the last minute in the run-up to the holiday:

"I have urged Fox and Time Warner Cable to agree to a temporary extension of carriage if they do not come to terms on a new carriage agreement today, in order to prevent disruption to their viewers. Companies shouldn’t force cable-watching football fans to scramble for other means of TV delivery on New Year’s weekend."

If 11th-hour talks don’t at least result in a temporary arrangement to keep the network from going dark, the FCC would consider ordering News Corp. to continue offering its channels for a short period of time, an FCC official told the Wall Street Journal (which is owned by News Corp.).

Time Warner said it would submit to arbitration in its battle with Fox over transmission fees, but the network responded Wednesday by saying it wasn’t willing to go that route, further jeopardizing a resolution just two days before the home of "American Idol" and several NFL games was to go dark for millions of cable subscribers.

In a letter Tuesday to Sen. John Kerry, Glenn Britt, the chairman and CEO of Time Warner Cable, wrote, “We are willing to commence an arbitration proceeding immediately before the FCC. And, to prevent any disruption to consumers while the proceeding is pending, we would enter into an interim agreement with Fox” to keep its programming on the air.

In its own letter to Senator Kerry, News Corp. deputy chairman Chase Kerry wrote, "We strongly believe this is an issue that needs to be settled at the bargaining table, and that binding arbitration too often looks to the past, not the future."

The current deal between Fox and Time Warner expires at midnight, December 31. As of Thursday night, no progress had been reported.

Late Wednesday, Sen. Kerry indicated he may try to get the FCC involved if the two parties don’t find a way to hammer out a solution.

"If Fox can find an alternative way to achieve that end or reach agreement with TWC before the contract expires, then there is no need for us to act," Kerry said in a statement released by his office. "If Fox believes that withdrawing programming from 4 million households is its best negotiating tactic, then I would ask the FCC to intervene and mandate continued carriage and arbitration as Senators Inouye and Stevens urged the FCC to do in a similar dispute in 2007."

Whoever blinks last, and when, may determine what Time Warner Cable subscribers can and can’t watch in 2010.

At least that’s how the News Corp.-owned network and Time Warner, the nation’s second-largest cable service, are framing the dispute.

News Corp. wants Time Warner to pay transmission fees – about $1 per subscriber — to carry its programming – which includes shows like “American Idol,” “24” and a slew of college football bowl games — something that cable operators have long resisted.

It’s a slippery slope for Time Warner. If they budge, and agree to pay Fox, other networks will undoubtedly demand payment for their shows.

Time Warner is said to have made a counter offer of 30 cents per subscriber. If Time Warner does agree to pay, subscribers will likely foot the bill in the form of higher rates.

The last time a standoff like this happened, the Los Angeles Times notes, was in 2000, when Time Warner Cable stopped carrying ABC for nearly two days, depriving “millions of viewers of Regis Philbin’s then hit show ‘Who Wants to Be a Millionaire.’”

Meanwhile, the standoff has turned into a propaganda war. Both Fox (KeepFoxOn.com) and Time Warner (RollOverOrGetTough.com) have launched Web sites pleading their cases to the public, and have promoted them, like this:

There are signs that even if a definitive deal isn’t reached by midnight on Thursday, Fox may not immediately go dark. According to the Dallas Morning News, Time Warner Cable says it has a deal in place to keep to Saturday’s Cotton Bowl game, Sunday’s Cowboys-Eagles game and Monday’s Fiesta Bowl game with Texas Christian University on the air.

"I assume negotiations will continue," Tony Vinciquerra, chief executive of the Fox Networks Group, told the Times. "Nobody has their guns out."