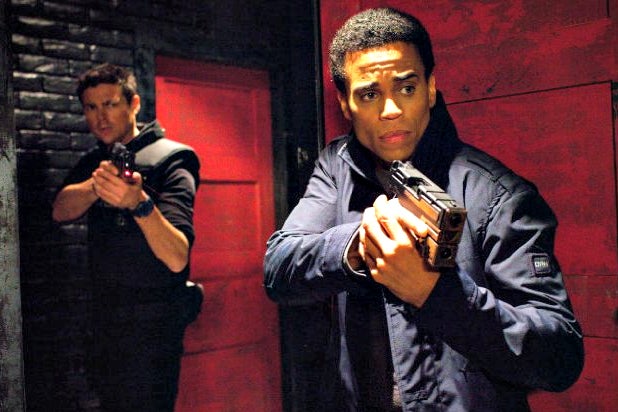 “Almost Human” can officially sit at the new series big boy table this Thanksgiving — at least when it comes to Live + 3 ratings.

The futuristic cop buddy show joined four other new shows from major network television to debut this fall to a rating of 4.0 or above in the Live+3 measurement, 18-49 demographic.

It’s the second show for Fox in the exclusive club — making them the only network with two. Fox is celebrating that advantage, especially since they launched fewer new series than ABC (8) and NBC (6), and the same as CBS (5).

“Almost Human” joins the previous series to hit the mark with their first episode: ABC’s “Marvel’s Agents of S.H.I.E.L.D.,” NBC’S “The Blacklist,” “CBS’ “The Crazy Ones” and Fox’s other new hit, “Sleepy Hollow.”

“Almost Human” bowed to a 3.1 rating in the advertiser-coveted 18-49 demographic. It rose a full point to 4.1 in L+3 ratings — but is still the lowest-rated of the club:

The Fox action-adventure series was created by J.J. Abrams (“Lost”) and J.H. Wyman (“Fringe”). It stars Karl Urban and Michael Ealy as cop partners in the year 2048 — the latter actor plays an android.

The L+3 measurement counts live + same day viewership, along with DVR and on-demand viewing over the 72 hours following the original telecast. Advertisers purchase airtime based on their C3 number, which closely mimics L+3.