When rock-doc veteran Ken Sunshine whispered into director Brett Morgen’s ear midway through Morgen’s introductory remarks at the “Kurt Cobain: Montage of Heck” premiere in Hollywood on Tuesday night, the audience knew something was up.

Moments later, the 22-year-old daughter of the Nirvana frontman strutted down an aisle in the Egyptian Theatre to speak from the podium.

“Hi, my name is Frances Bean Cobain,” said the all black-clad executive producer, and reported rights-holder to her late father’s image and licensing. 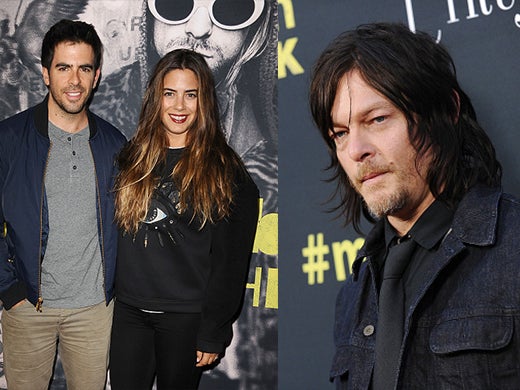 Some of the grainy 1990s footage includes Frances Bean’s own parents’ foreplay, a possible mid-pregnancy heroin binge, and her own early infant milestones, like her first birthday and Christmas.

Post wardrobe change: Love and director/producer Brett Morgen at the after party at Sadies. (FilmMagic)

“I didn’t know Kurt,” she began, calling her father by his first name as she has done in recent appearances.

“I feel very, very strongly that he would be exceptionally proud of this film. It touches on some dark subjects, but at the end of the day,  I think this film provides fans of Nirvana or not fans of Nirvana a basic understanding of who Kurt was as a human being,” Cobain continued.

“I think that’s been lost within the romanticism of him and the myth of  him and his story.”

Seated next to her mother, Coutney Love, Frances Bean had already seen the movie six times. Her executive producer title could put her in the awards conversation next winter if Morgen’s film makes a run at the documentary prizes.

The film begins a limited one week release this Friday, which will qualify it for the .

Morgen has a special stunt planned for fans who head to the Arclight in Hollywood on Friday to see the film. At the 8 p.m. screening, he’s placing one golden ticket under a seat in the , good for a private tour of the Kurt and Courtney video vault he had access to for the film.

After the screening, guests filed across the street to the former hotspot Les Deux, now the restaurant Sadies.

There were no laptops in the DJ booth – just vinyl LP’s spinning.

Baffled by a Billboard

A confusing billboard on Hollywood Blvd., across from the Egyptian. (Courtesy of @SBaker64, Twitter.com)

Earlier in the night, Ratner had his own moment of confusion.

“What is this?” He said  to himself as he noticed a billboard for a “Rush Hour 4” featuring Sean Combs. He walked a few paces down Hollywood Boulevard away from the entrance to the red carpet and the premiere to get a closer look.

While there is a CBS drama pilot rebooting the “Rush Hour” film franchise, there is no 4th film in the works.   Diddy did do a song on the “Rush Hour 2” soundtrack, but the rest is a headscratcher.

“Kurt Cobain: Montage of Heck” opens in a limited theatrical release this Friday (April 24) via Universal. Then, it debuts on HBO on Monday, May 4 at 9 p.m.