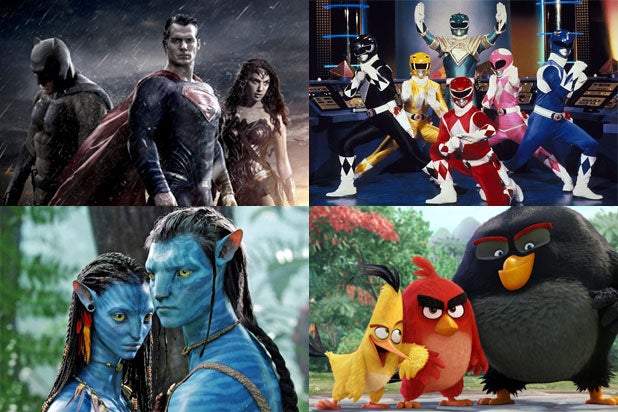 Studios have for decades understood that a successful movie series can provide a reliable revenue stream, enable synergistic merchandising and licensing profits and provide a company with structure, direction and the ability to plan.

But over the past few years, Disney has assembled a roster of film franchises unparalleled in Hollywood history. It includes movies series from Marvel (“The Avengers”), Pixar (“The Good Dinosaur”) and Disney Animation (“Big Hero 6”), its own classic fairy tales (“Beauty and the Beast”) and the cherry on top, “Star Wars” developer LucasFilm.

Together, those companies films have grossed more than $30 billion — that’s with a “b” — at the worldwide box office.

This year is on course to be the highest-grossing ever domestically, and the primary drivers will be franchise films like Marvel’s “Age of Ultron,” Lionsgate Entertainment’s “Hunger Games” finale and the first “Stars Wars” movie in a decade, along with “Jurassic World’ from Universal Pictures and Paramount’s reboot “Terminator: Genysis.”

The potential mega-profits remain and rivals’ desire to rein in Disney’s domination has intensified the franchise arms race, though it’s worth noting that studios are primarily concerned with their own bottom lines, not beating their rivals.

Here’s a rundown of who’s banking on what to counter the Mouse House arsenal:

Warner Bros.
Best Bet: “Batman v Superman: Dawn of Justice”
Longer Shot: “Fantastic Beasts and Where to Find Them”
It Could Happen: “Entourage”

Start with the DC Comics Movie Universe, which now includes Zack Snyder’s “Batman v Superman: Dawn of Justice,” David Ayer’s “Suicide Squad” and two “Justice League” movies slated to be directed by Snyder, as well as solo films about Wonder Woman, Aquaman, Shazam, Cyborg, Green Lantern and The Flash, not to mention an adaptation of Neil Gaiman’s “Sandman.” “Harry Potter” author J.K. Rowling returns to the WB lot with a planned trilogy based on her bestseller “Fantastic Beasts and Where to Find Them.” Warner Bros. has already bid a fond farewell to the hit “Hobbit” and “Hangover” franchises, but they’ve been replaced by a growing “Lego” franchise that includes a sequel to last year’s animated movie, as well as a Lego Batman spinoff and the 3D film “Ninjago.” Female audiences are already in a tizzy over Channing Tatum’s stripper sequel “Magic Mike XXL,” which drops this summer along with “Entourage,” a relatively low-budget film (for Warners) that, in true Hollywood fashion, could always merit a sequel.

While “Horrible Bosses” has likely run its course, there are sequels to “Godzilla” and “Sherlock Holmes” in development, and it’s safe to expect the visually spectacular “Mad Max: Fury Road” to do big business this spring. There are also franchise hopes for Joe Wright’s “Pan,” David Yates’ “Tarzan” and New Line’s “Vacation” reboot, as well as a pair of Guy Ritchie movies — “The Man From U.N.C.L.E.” and “Knights of the Roundtable: King Arthur,” not to mention the Stephen King adaptations “It” and “The Stand.” The studio also distributes Alcon’s productions, and that company has enlisted Harrison Ford for another “Blade Runner” movie that will be directed by Denis Villeneuve.

Even if it was the only franchise that Fox had, the studio would be just fine with James Cameron’s three upcoming sequels to “Avatar,” his 2012 sci-fi blockbuster that is by far the top-grossing movie ever. It’s not however, and Fox will be formidable through at least 2019, when the last of Cameron’s sagas is scheduled. “X-Men: Apocalypse” will continue the momentum of the Marvel superhero series, and Mystique, Beast and their buddies will boost spin-offs “Wolverine 3” and “Gambit,” with Channing Tatum. Another comic book adaptation with “X-Men” DNA, the Ryan Reynolds-starrer “Deadpool,” has major buzz ahead of its February 2016 debut. We’ll find out in August how far the red-hot young cast of “Fantastic Four” can carry the reboot.

It’s not all superheroes. September’s “The Scorch Trials” will determine how much punch the the “Maze Runner” series has. Ridley Scott returns later that year with “Prometheus 2” and Neill Blomkamp will try to breathe new life into Fox’s dormant late ’80s “Alien” franchise. The studio is digging even deeper into the vault for its “Poltergeist” remake, and “The Peanuts Movie” will finally bring Charlie Brown to the big screen. It’s not official, but the success of Matthew Vaughn’s very British “Kingsman: The Secret Service” virtually assures Colin Firth’s return as the super spy. Video games haven’t delivered as movies in the past, but “Assassin’s Creed” could break the curse.

Hit series “Twilight,” “The Hunger Games” and “Divergent” established Lionsgate as the leader in adapting young adult books to the big screen. Jennifer Lawrence is done with Katniss after this year, but two “Allegiant” films arrive in 2016-17, and the studio optioned Anna Carey’s teen thriller “Blackbird” on Monday.

Lionsgate believes “Now You See Me: The Second Act” can build on the global success of the original heist thriller, and if it does, there will be a third. It’s the same scenario for “John Wick,” the Keanu Reeves assassin saga that broke out last year. Arguably the safest bet to morph into a series is Haim Saban’s live-action reboot of the “Power Rangers,” which arrives in 2016. The Vin Diesel action fantasy “The Last Witch Hunter” could be the first in a series as well.

With Tom Rothman at the helm, expect Sony to recommit to the franchise business. The studio is going all-in on two of its signature series, rebooting “Spider-Man” in conjunction with Marvel and doubling down on “Ghostbusters” by launching a Cinematic Universe of supernatural comedies that will feature different casts. Sony hasn’t taken advantage of the “Ghostbusters” IP in more than a decade, and it’s counting on Ghost Corps to generate a significant revenue stream. Fortunately, Sony has begun taking the necessary steps to stop Spidey’s precipitous slide at the domestic box office by teaming with the hit-makers at Marvel and coasting on that studio’s goodwill among comic book fans. Sony currently shares the lucrative James Bond franchise with MGM, and Daniel Craig is slated to return for one more film after “Spectre.” While Sony has let Craig’s “Dragon Tattoo” franchise stall and may choose to recast the title character down the line, it is reviving Tom Hanks’ Robert Langdon series, with Ron Howard returning to direct “Inferno” this spring.

Jonah Hill and Channing Tatum’s “Jump Street” franchise is still hot even if Will Smith’s “Men in Black” is not, but both Adam Sandler’s “Pixels” and Jack Black’s “Goosebumps” could spawn youth-skewing franchises and “Barbie.” The studio also has high hopes for Chloe Moritz’s YA sci-fi movie “The 5th Wave,” which boasts a passionate fanbase, and a “Jumanji” remake from “SpiderMan” producer Matt Tolmach. Don’t give up hope for sequels to Denzel Washington’s “The Equalizer,” Angelina Jolie’s “Salt,” Will Smith’s “Bad Boys,” Jumanji or Jaden Smith’s “The Karate Kid.” Sony Pictures Animation has “The Smurfs,” “Hotel Transylvania” and “Cloud With a Chance of Meatballs,” while Columbia Pictures’ upcoming “Angry Birds” movie could hatch a sequel if the first film flies at the box office. Sony is also developing a fresh take on “Robin Hood,” an adaptation of the popular video game “Uncharted” and another faith-based project that reunites the filmmakers behind “Heaven Is for Real,” though the story is unrelated.

Paramount has a very healthy franchise business led by Michael Bay’s “Transformers,” which despite fading domestic grosses, remains a global juggernaut. “Star Trek,” “G.I. Joe” and Tom Cruise’s “Mission: Impossible” franchise are still blockbuster events, while “Teenage Mutant Ninja Turtles” and “SpongeBob Squarepants” deliver kids in droves. Paramount is rebooting the “Terminator” franchise again this summer, and there’s a new “Paranormal Activity” movie due out this October. The horror hits don’t end there, as the studio is developing another “Friday the 13th” film and has said “I do” to another chapter in the “Ring” franchise. On the comedy side, the studio has finally greenlit a sequel to “Zoolander” more than a decade after Ben Stiller’s first film, and while the “Hot Tub Time Machine” franchise may have dried up, we’re betting Johnny Knoxville’s “Jackass” brand still has some life in it.

Though “Jack Ryan” came up a bit short and “Jack Reacher” barely broke even, the studio is pressing ahead with sequels to Brad Pitt’s “World War Z” and Jeremy Renner’s “Hansel and Gretel.” The studio is also developing “Beverly Hills Cop 4” for Eddie Murphy and “Top Gun 2” for Cruise. Finally, there’s hope that “Monster Trucks” could become a franchise if the upcoming movie succeeds. The big-budget movies that Paramount makes tend to perform well, the problem has been that there aren’t enough of them, and the ones that do get made go over-budget. Expect Paramount’s output to swell with Marc Evans as the helm of the studio.

The $2.3 billion “Fast and Furious” franchise shows few signs of fraying as the studio revs the seventh installment of hot cars, hot guys and hot gals series. Matt Damon and Jeremy Lin are reanimating the “Bourne” movies and those “Minions” aren’t going anywhere. Its classic monsters series (which kicks off with the June 2016 release of “The Mummy”), “Jurassic World” and films like “The Purge” from the ubiquitous Jason Blum all have the potential to catch lightning in a bottle, too.

Recent youth-skewing hits like “Ted,” “Neighbors” “Pitch Perfect,” along with “Lucy” and “The Best Man” were all surprisingly lucrative hits and have spawned sequels. Depending on which of those clicks and to what extent, any could evolve into series.

Disney has seven billion-dollar grossers under its belt, nearly twice as many as any other studio, and thanks to some smart investments, the Mouse House is now home to the two biggest movie franchises of the moment — “Star Wars” and “The Avengers.” The studio also has plenty of Marvel movies to keep the coffers heavy, such as “Ant-Man,” “Doctor Strange” and the upcoming “Black Panther,” “Captain Marvel” and “Inhumans” films, as well more sequels to “Captain America,” Thor” and “Guardians of the Galaxy” and a two-part “Avengers” finale due in 2018 and 2019. Likewise, Rian Johnson’s “Star Wars: Episode VIII” just set a May 2017 release date, while the Felicity Jones-led spin-off “Star Wars: Rogue One” hits theaters in December 2016.

The studio just announced an undated sequel to its animated hit “Frozen,” while Pixar’s “Toy Story 4” is the gift that is expected to keep on giving in June 2017. Johnny Depp plays a key role in Disney’s live-action franchise plans, with the star wrapping an “Alice in Wonderland” sequel due in May 2016 before setting sail for a fifth film in the “Pirates of the Caribbean” franchise, which is currently in production and will no doubt deliver quite a booty at the box office when it washes ashore in July 2017. The studio is also developing another “Tron” movie with director Joseph Kosinski and there’s no telling whether Brad Bird’s “Tomorrowland” lends itself to a franchise due to secrecy surrounding the film’s futuristic premise, though it’s certainly possible.