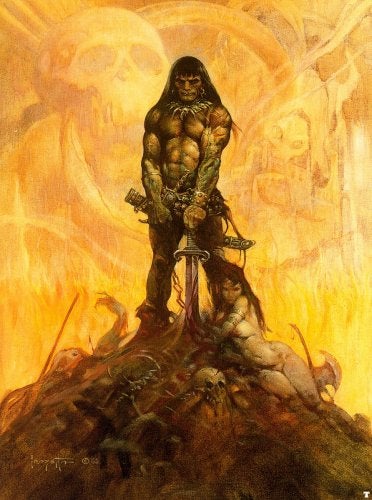 Frank Frazetta, the master illustrator whose brooding, epic painting style shifted the tone of comics and fantasy paperback covers forever, has died. He was 82.

Frazetta, who had a history of strokes, suffered another over the weekend and died Sunday after falling ill, his business managers told the New York Times.

Frazetta's genre work stood out for its highly trained realism and bold use of light and color, especially as it applied to oversized characters and fantasy creatures.

Perhaps Frazetta's most recognizable work was the cover art for Robert E. Howard's "Conan the Barbarian" series, a genre title in line with what would be his greatest strength: shirtless, sword-and-sorcery heroes in quasi-Norse or prehistoric garb, posed with helpless women in apocalyptic landscapes.

Born in Brooklyn, N.Y., Frazetta showed an artistic flair as a child, enrolling at the fine arts academy there at the insistence of his teachers. He began working on comic books as a teen, going on to illustrate syndicated comic strips, book covers, movie posters, and rock album covers.

Frazetta was plagued by health problems, including a series of strokes in the 2000s that forced him to learn painting with his left hand. He was later the subject of a feature documentary "Frank Frazetta: Painting With Fire."

Even in life, his original works were known to sell for upwards of $1 million.