Frank Stallone, Sylvester Stallone’s younger brother, has apologized after a tweet in which he slammed Parkland mass shooting survivor David Hogg as a “p—y” went viral.

“To everyone and to David Hogg especially. I want to deeply apologize for my irresponsible words,” tweeted the younger Stallone brother on Sunday. “I would never in a million years wish or promote violence to anyone anywhere on this planet. After what these kids went though I’m deeply ashamed. Please accept my apology. Frank”

Stallone set off a wave of insults across Twitter Saturday after calling the high school student and gun control activist a “p—y,” “little bitch” and a “coward” — and suggesting that the teenager deserves a “sucker punch.”

To everyone and to David Hogg especially. I want to deeply apologize for my irresponsible words. I would never in a million years wish or promote violence to anyone anywhere on this planet. After what these kids went though I’m deeply ashamed. Please accept my apology. Frank

“This David Hogg p—y is getting a little big for his britches,” Stallone tweeted. “I’m sure someone from his age group is dying to sucker punch this rich little bitch. Watch him run home like the coward he is. He’s the worst rep for today’s youth headline grabbing punk.” 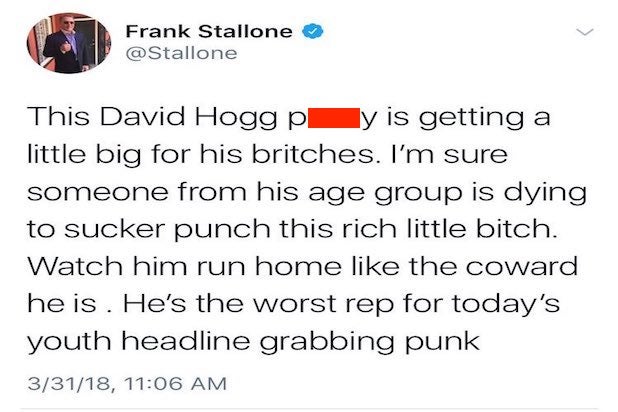 Reactions came swiftly on Saturday, with many taking a swipe at Stallone’s invisible career.

He locked his account about 5 minutes ago, so we’ll have to wait for him to crawl out from under his rock to get it to him. He’s scared of teh twitters. ????

Frank Stallone: I am very tough and the Parkland teens are cowards.

Frank Stallone: See what I meant to say was pic.twitter.com/BsSXEqB3u2

I’d suggest we’d boycott Frank Stallone, but what is there to boycott?

It’s time to boycott Frank Stallone’s projects. Nobody go to the car wash he works at.

Sly’s younger brother is a singer/songwriter, whose single “Far From Over” from “Staying Alive” made it to No. 10 on the Billboard Hot 100 and was nominated for a Golden Globe award for Best Original Song from a Motion Picture in 1983.

In the ’90s, he was a running gag on “Saturday Night Live” during the Weekend Update segment hosted at the time by Norm Macdonald.