This “Freaky Friday” has a lot to recommend it, starting with a smartly updated book by TV veteran Bridget Carpenter (“Friday Night Lights”) as well as a mostly bouncy score by composer Tom Kitt and lyricist Brian Yorkey (“Next to Normal”).

The La Jolla production, like the one at Signature, also benefits from show-stopping performances by Broadway pros Heidi Blickenstaff (“[title of show]”) and Emma Hunton (“Spring Awakening”) as a Martha Stewart-like wedding planner named Katherine and her 16-year-old daughter, Ellie, still smarting from the death of her dad when she was in junior high.

Blickenstaff, who’s arranging her own high-stakes wedding ceremony to a new guy (David Jennings), manages to capture all of the slackerly mannerisms of a teenage girl, including her awkwardness around her hoverboard-riding high school crush, Adam (a winsome Chris Ramirez).

Hunton, meanwhile, has the trickier task of channeling the more reserved and OCDish mom — though she lets her grown-up exasperation shine through in nice moments, as when Adam compliments her on pulling back her hair to show her eyes (a point of contention with her daughter that prompts her to half-shout, “Thank you”). 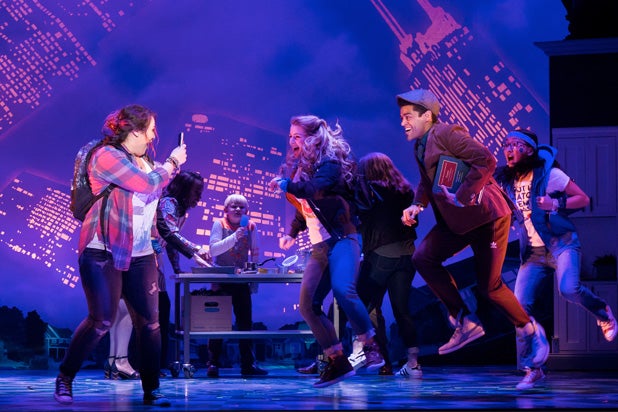 Blickenstaff and Hunton have strong soprano voices, which they use to great effect on the bluesy second-act show-stopper “Bring My (Baby) Brother Home.” But too many of Kitt and Yorkey’s songs fall into that vaguely R&B-ish, pop-lite category you’d find in the Disney Channel’s “High School Musical” series. (And poor Ramirez is saddled with an unfortunate number that likens women to sandwiches: “They’re more complicated than burgers or fries… or guys.” Check, please.)

The score seems more dated than the story, which at least incorporates cellphones in a nod to contemporary youth culture. While Hunton’s Ellie sports pink-dyed streaks in her hair and dons a Kurt Cobain T-shirt, her songs lack any sense of rock ‘n’ roll — or even 21st-century pop. There certainly isn’t much edge here — though that may be the point.

As directed by Christopher Ashley, “Freaky Friday” is a curse-free, family-friendly production that embraces its old-fashionedness. The most surprising moment comes when Ellie and her teenage pals strip to their skivvies as part of a high school scavenger hunt that involves sending photos via cellphone.

“Don’t squander your time being ashamed of your bodies,” Katherine-as-Ellie tells her pals. And then she adds, with grown-up wisdom, “Because this is as good as it gets.”

The show gets considerably better from there — and will no doubt satisfy a target audience of tween girls and their moms. Since women buy the vast majority of theater tickets, it’s a bit surprising that Disney has no current plans to bring “Freaky Friday” to Broadway. (Regional productions in Cleveland and Houston have already been announced.)

Of course, the entertainment giant said the same thing about “Newsies” before that similarly non-cartoon-inspired musical enjoyed a Tony-winning two-year run on the Great White Way. And with a little tweaking, this one too could find itself hoverboarding onto a bigger, brighter stage.