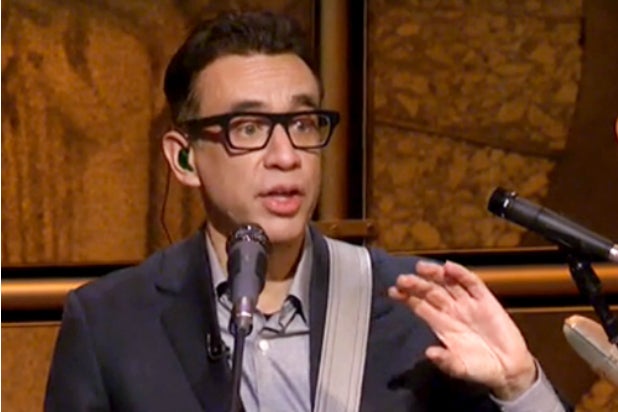 Fred Armisen will be back as Seth Meyers‘ “Late Night” bandleader tonight, following a busy hiatus.

Don’t expect his chops to be rusty, however.

“It’s easy,” Armisen told TheWrap of his come-and-go-as-he-pleases side gig. “We make up the songs on the day.”

As confident as Armisen is in writing and playing the actual music, he’s just as confident working with his hand-picked “Late Night” 8G Band-mates.

“The people who are there are old friends of mine,” he said. “So, it’s not like I had to sit with a bunch of strangers and explain to them what I wanted it to sound like.”

“It’s people whose sound I already liked … I love those bands,” Armisen added during our sitdown interview this summer at the Television Critics Association press tour. “They know what to do.”

Armisen, whose “Documentary Now!” (also with Meyers) returns Sept. 14 on IFC, is busy even beyond those two shows — there’s “Portlandia,” too, of course. With so many balls in the air, the “Saturday Night Live” alum tries to live in the now, and schedule his dates in the same exact way.

“I never think ahead,” Armisen explained. “For me, I look at the next month … at most.”

“Because I know Seth and Mike Shoemaker so well, they know where I am and they know what I’m working on,” he concluded of his part-time work. “I don’t even have to explain anything. I’m like, ‘Well, this month isn’t good, I have to be in Portland … it really is a dream, that whole thing.”