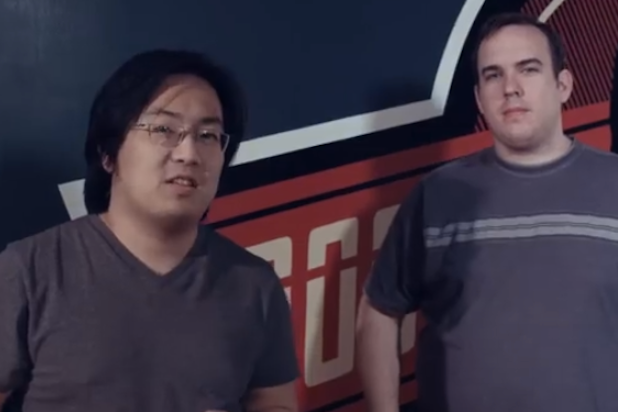 Freddie Wong is ready to talk to investors about his future. Wong and his partners will begin production on the third season of “Video Game High School” March 1, bringing one of the most successful digital series to a close two years after they started it.

As he did for the first two season, Wong is asking his fans to contribute to the production. He doesn’t need the money to make it this time around, but he wants to use their money to deliver better effects than ever before. Yet once Wong wraps “VGHS,” he will turn his attention to more traditional financiers who might fund the growth of his website, RocketJump.

Wong has eschewed traditional film and TV projects in part because he wants some ownership over anything he makes, and he hopes investors will buy into the idea that he has potential beyond directing. He can run a media company.

Also read: Why Freddie Wong’s Indiegogo Campaign Is Just a Small Glimpse Into His Future

TheWrap spoke with Wong about building the next HBO, and wrapping up “Video Game High School.”

Why did you choose Indiegogo Instead of Kickstarter?
Two reasons are basic and technical. Indiegogo lets you use PayPal, and we have a large international following where PayPal is a big deal for them. Indiegogo also lets you embed your campaign on a website. One of our goals is to figure out ways of diversifying where we are. Our goal is to build out our site and bring traffic to it.

The third reason is a little more complex. We’re in season three, and this is not a new project coming out of nowhere. Flexible funding made more sense for the state we’re in and seemed a little more genuine in terms of representing what this project is. This is not a brand new movie. We are not saying we need this money to make it happen. Season 1 and 2 are on Netflix. They have been successful.

So you don’t need as much money, even though the goal is higher than with the first two campaigns?
It’s a fundamentally different campaign. We have enough of a baseline where we can make sure this will happen in some form. This is almost like a pre-order. We want to focus on what’s cool about it and what we can get perkswise. Everything we’re doing here is about improving the final product.

What changes from season two to three?
This is our last time out. Everything in terms of action and visual effects are an order of magnitude higher. Let’s do giant matches and on a technical basis, 4K is something we could potentially do. We have the hardware for it.

Another technical experiment. You shot certain scenes in the last one with a higher frame rate.
We really liked it. We are planning on doing the same thing with this one. We can’t offer a Blu-Ray in 48. If ‘The Hobbit’ can’t do it we sure as heck can’t do it. It’s fun because it let’s us play with the idea of high-frame rate in a story context. We are not just trying it because we thin it looks cool. It’s how we demarcate a game versus what is real. The usual way in a film might be an aspect ratio change or a color correction shift. the real world is blue; the matrix is green.

For those unfamiliar with 4K, what is it?
It is four times the resolution of a standard HD video. It became this hip buzzword with 4K TVs and things like that. YouTube does support 4K playback. We’re trying to push the boundaries of what’s available. It may not play back smoothly on most people’s computer.

You’re about to finish ‘VGHS’ for good.  The next step is expanding your site, RocketJump. How are you going to do that?
We want to push it as a technology platform. Venture capitalists don’t pay attention to you unless you have an app or a widget. Our strength is in creating content, but we can do a couple of things with Rocketjump as a site. Comment systems and interactions with a user base are shit across the entire Internet. Most blogs do it horribly and there are entire articles written about the nature and quality of discourse contained in YouTube comments.

We have some ideas about how to make it a more robust community and how to structure interaction with your audience in a way that makes more sense.

So you’ve reached out to VCs about investing in it?
At a very high level we’re trying to figure out how to get content financed. Content financing is a difficult beast no matter what era of Hollywood we’re talking about. We are looking for investment to build out the infrastructure. The goal is not to just do ‘Video Game High School’ every year. We want to grow into a real content production company. We want to be Pixar or HBO. We want to make five series a year or 10 series a year.

We just need the resources to execute on it.

Do you have people you want to bring in?
Luckily I have myself and my partners Matt [Arnold] and Dez [Dolly]. We all met in film school. We have talent ready to go. Now the challenge is finding the next project and finding people who are passionate, have a skill set and are forward thinking enough to see what direction online is going in, and how it provides more upside than more traditional avenues.

Most scripts are written by people who want to turn it into a feature film. It’s hard to find projects where they want to do it online.

So if someone came to you with the opportunity to make a feature film, you wouldn’t want to do it?

It’s not that. They key is we don’t want to sell out our platform and what we’ve built. If there is a movie deal on the table but it doesn’t include any platform we’ve built, it doesn’t make any sense to me.