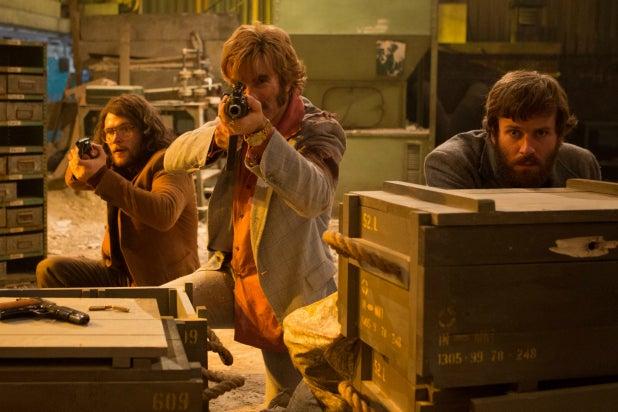 If the idea of spending 90 minutes watching people confined to one room shoot at each other, bleed, crawl, stagger, and occasionally quip comically, sounds like a good time — by all means go see “Free Fire.” Otherwise, you might want to take a pass.

Actually, about 45 minutes of this confined target practice is brutishly entertaining, thanks mostly to the bullet-ballet choreography of director Ben Wheatley (“High-Rise”). But too often his cinematic verve gets drowned out by all the gunfire and nihilism. We cease to care about who lives, dies and what body parts are shot off. It doesn’t help that, at certain points in the chaos, it’s hard to tell who’s whom.

Both frustratingly and intriguingly, there are no good guys per se. Pretty much everyone is a low life in this late-’70s action caper. What you have are a bunch of petty, trigger-happy criminals who are generally not great shots. So you’re stuck rooting for the cute Irish guy (Cillian Murphy), the cute American girl (Brie Larson) or maybe just the guy with the widest lapels or the best porn mustache. Nobody has the kind of ethics anyone would find remotely admirable, but they all have some kind of twisted sense of morality — loosely centered around how a woman has been treated.

This violent action comedy is about an arms deal gone very, very wrong. Nominally, the leads are a pair of IRA gunrunners, Chris (Murphy) and Frank (Michael Smiley, “The World’s End”) who come to an empty warehouse in Boston to buy machine guns from local black market weapons dealers. Those dealers are shady South African gun runner Vernon (a scenery-chewing Sharlto Copley) and his partner Martin (Babou Ceesay, “Eye in the Sky”).

The deal is facilitated by his suave henchman Ord (Armie Hammer) and their unflappable young business associate Justine (Larson). Then there are the drivers, go-betweens, and accomplices, who are a nasty stew of hotheads. Put them all in an abandoned factory and things go south faster than a speeding car on the Mass Turnpike.

In a gonzo satirical way, “Free Fire” ends up being a gritty commentary on the madness of gun violence. The disreputable bunch of characters involved in a massive shootout in a very enclosed space recalls Quentin Tarantino’s “The Hateful Eight.” Factions form and dissolve, people begin by looking out for each other, then very soon it’s every loser for himself.

Martin Scorsese is an executive producer (of course he is), and the film occasionally plays like an homage to his earlier work. Actually it feels like a tip of the hat to all kinds of gritty action flicks, up to and including the overused Creedence Clearwater Revival song “Run Through the Jungle” in the film’s opening.

Obnoxious comments are occasionally loutishly funny, but once we’re confined with these characters for so long, the bar for humor goes down substantially. We long for anything that doesn’t sound like a resounding gunshot, so even a weak joke is a welcome reprieve from the unrelenting carnage.

The guns are innumerable, the shots fired are uncountable and the fact that anyone lives through this monstrous melée is incredible. How can so many people in the arms business be such terrible shots? In other words, this is akin to a live-action cartoon, intended only for adults.

Some performances are noteworthy. It’s a major departure for Larson and, solid actress that she is, she acquits herself well. Her level-headed character is, if not always believable, at least consistent and always watchable. Her eyerolls speak volumes. Hammer is a hoot as the bemused and bearded frontman Ord, incongruously clad in a natty turtleneck and sport coat. All he needs is a pipe and elbow patches to cap off his wry observer status, coming off like one of the public broadcasting brawlers in “Anchorman.”

Lunks and dolts form the backbone of the sordid operation. There’s junkie Stevo (Sam Riley, “Control”) and his dim-witted buddy Bernie (Enzo Cilenti, “The Martian”). Stevo and Harry (Jack Reynor, “Sing Street”) kick off the savagery, allegedly over Stevo’s attack on Harry’s female cousin. But the inciting event hardly matters since everyone soon takes part in the barbarism with gusto.

When guns are unreachable or out of ammo, other methods of attack come to the fore. No violent melée is complete without fiery explosions. But few action thrillers would think to include a bout of torso tickling, as this does.

Wheatley co-wrote the script with frequent collaborator Amy Jump. While some lines fall flat, there is some clever badinage amid the whizzing ammunition (including the use of the word “badinage”). Larson’s Justine utters probably the pithiest and most pointed line, the ideal commentary, actually. Two words: “Ugh, men.”

“Free Fire” is an ultra-violent, gut-punching spectacle that borders on a slog. It makes you feel guilty even for enjoying minutes of it, and then empty after it’s all done.