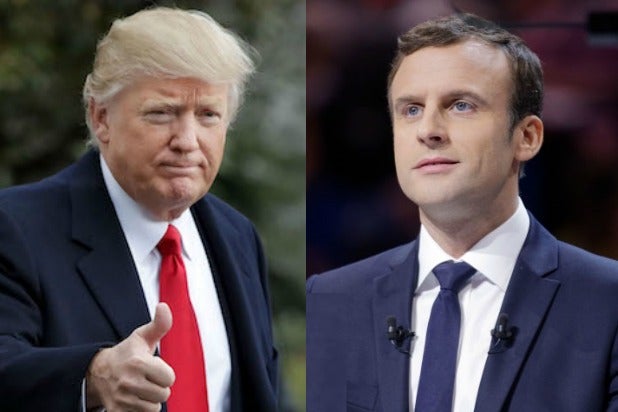 Shortly after the results of the French election came in on Sunday, I ran into director Luc Besson at the farmer’s market in Los Angeles.

I wished him congratulations on the landslide victory of Emmanuel Macron.

“Phew,” he said, echoing what so many of us said over social media. One thing was clear, he said: Donald Trump’s presidency had had an impact on French voters.

“We saw what happened here, and we thought this should not happen to us,” he said. “I think it mobilized people.”

I’ve known Besson for more than 20 years, from back when I was a freelance writer in Paris and he was an exciting new voice in cinema with “La Femme Nikita” and “The Big Blue.” I’ve never known him to be openly political — his films “The Fifth Element” and upcoming “Valerian and the City of a Thousand Planets” are sci-fi fantasy, not public policy — but the stakes were so high in France that virtually no one I know there feels they could afford to be uninvolved.

In their resounding rejection of far-right candidate Marine Le Pen, the French voters may have saved the European project, or at least put the brakes on what seemed like a runaway impulse to undo decades of unification, social progress, economic openness and, most of all, peace.

The two were not friends, and Trump did not openly endorse Le Pen, whose National Front party has its roots in racist and anti-Semitic demagoguery, founded by Marine Le Pen’s father, Jean-Marie.

But the thrust of the two campaigns revealed kindred spirits, targeting outsiders as the root of each nation’s problems. Disparaging “bad hombres” who seek to take advantage of the citizens’ wealth and generosity. Calling for putting ourselves first, and stop worrying about the weak. Rejecting immigrants and a focus on crises abroad.

But those promises have turned out to be hollow in this country, as Trump instead has focused on further enriching himself and the billionaire and millionaire class while doing precious little for the little guy who voted him in.

The chaos and instability that has accompanied the Trump presidency undoubtedly spooked many in the French right-wing establishment, who set aside their misgivings around the newcomer Macron and threw their weight behind him.

In accepting the presidential victory, Macron spoke with moving eloquence about his responsibility to care for all French people:

“I know the anger and anxiety and doubt a great number of you have also expressed,” he said on Sunday night. “It is my responsibility to hear you, and to protect the most fragile, to show solidarity, to fight all kinds of discrimination and to guarantee the unity of the nation.”

What a beautiful example of what a presidency can be, of what higher purpose a political platform can serve. In his words, Macron reminded me of no one more than Barack Obama in 2008, upon his unlikely win of the U.S. presidency.

Which brings to my other point. The French voters rejected the narrow nationalism of the National Front, but they also rejected establishment politics. The vote came down to a choice between two political outsiders, since not a single major party candidate made it to the second round. And voters had already expressed their dislike for the sitting president Francois Hollande, who decided not to run at all.

So, like the United States, France is seeking something new and different from their political leaders.

Thankfully, they chose a path that is a more sane and mature than the frightening developments here that suggest: Apres moi, le deluge.