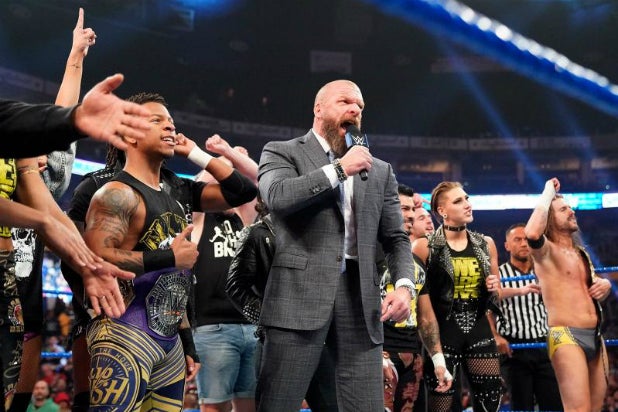 Well, that sure wasn’t the plan — but it worked. While most of WWE’s talent was stuck in Saudi Arabia, Fox won Friday in primetime ratings with its rushed-together “SmackDown” show.

Posting a 0.8 among adults 18-49, which is the sought-after demographic for advertisers on entertainment programming, “Friday Night SmackDown” was the highest-rated series of the night on broadcast. The episode averaged 2.543 million total viewers, according to Nielsen.

Two weeks ago, the last time the weekly wrestling series was on Fox, “SmackDown” got a 0.7 rating and 2.441 million total viewers. Both of those were series lows on Fox.

Also Read: Does Corey Graves, the Voice of WWE, Prefer the Commentary Setup for 'Raw' or 'SmackDown'?

Crunching some numbers, last night delivered a +14.3% ratings improvement over the Oct. 18 episode, comparing Nielsen fast-affiliate ratings. In terms of total viewers, the Fox TV audience grew by 102,000 people vs. the show two weeks ago. That’s just a 4% bump, meaning the Nov. 1 episode did disproportionately well among young adults.

But hey, up is up. And it makes sense that the heavy presence last night from WWE’s little-brother brand “NXT” would attract a relatively younger audience. The NXT title was even (successfully) defended in the main event.

The competition’s shows that came closest to matching “SmackDown’s” rating were “Hawaii Five-0” and “American Housewife.” Both of those had 0.7s last night.

In final Nielsen numbers, which will be out later, the Oct. 18 “SmackDown” on Fox maintained its 0.7 demo rating but actually adjusted down to 2.418 million total viewers.

“Friday Night SmackDown” aired on FS1 last week to accommodate the World Series on Fox. FS1 is available in far fewer households than broadcast networks like Fox are, so comparisons for the one-off arrangement are not very valuable. They would, however, make these numbers look great.