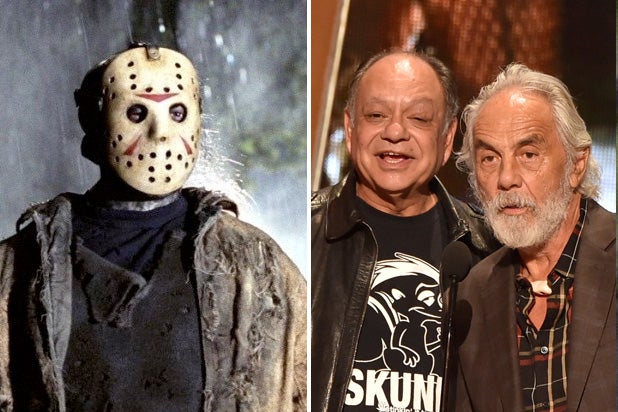 Stoner comedians Cheech Marin and Tommy Chong are classic cut-ups — but imagine if they got cut up by that ultimate slasher villain Jason Voorhees.

Tom McLoughlin, the writer-director of 1986’s “Jason Lives: Friday the 13th VI,” said he once pitched the idea of a mashup of the two big-screen franchises to “Friday the 13th” series producer Frank Mancuso Jr.

“What if we do ‘Cheech and Chong Meets Jason?'” McLoughlin recalled telling Mancuso on Wednesday’s edition of horror filmmaker Mick Garris’ Post Mortem podcast. “They’re like camp counselors or something. It’s like, ‘Hey, man, I saw Jason out there.’ ‘No, man, that’s a myth.'”

Mancuso shot down the idea — even though Paramount then owned the rights to both franchises.

But the exec did let on that another pitch of McLoughlin’s — pitting Jason against Freddy Kreuger of “Nightmare on Elm Street” — wasn’t so far-fetched despite the latter being a property of New Line Cinema.

McLoughlin said that Mancuso told him, “Well, we’re going to try and see if we can work something out.”

As fans know, the two villains did go head to hockey mask in 2003’s “Freddy vs. Jason.”