Every year, TV networks trot out a raft of new offerings to compete for viewers’ eyeballs — an increasingly difficult task, given the ever-growing number of options available to the public. But even in what some have dubbed the new Golden Age of Television, there are bound to be some shows that are less deserving of your time than others.

In 2015, the viewing public will be faced with choices that include, not one, but two new shows from “Breaking Bad” creator Vince Gilligan; an update on iconic sitcom “The Odd Couple;” and a comedy starring “Saturday Night Live” alum Will Forte as the last remaining male inhabitant of earth, among numerous other new prospects.

In an effort to help you prioritize your viewing time over the next 12 months, TheWrap presents the 19 new shows that we’re most looking forward to this year. Let’s hope that they live up to our expectations.

Despite its questionable title (for those who prefer their words spaced, anyway), this upcoming comedy offers an intriguing premise, and an outstanding pedigree in star Denis Leary, who’s reuniting with FX after leading the network’s cherished drama “Rescue Me.”

In the new series, Leary plays Johnny Rock, a washed-up, would-be rock star who, now solidly middle-aged, takes another stab at the limelight after sabotaging his career via the time-honored traditions of substance abuse and sexual indiscretion. Toss in “Northern Exposure” alum John Corbett as Rock’s lead guitarist and this could be a band worthy of a reunion.

Plus, if Leary’s previous contribution to the musical canon (“Asshole,” anyone?) is any indication, viewers could be in for some chuckle-worthy tunes, as well.

“Battle Creek” (CBS), Premieres Sunday, March 1 at 10 p.m.
Shows about mismatched police partners are nothing new, but when former “House” boss David Shore and “Breaking Bad” creator Vince Gilligan are involved, you can expect more than a few twists on this old formula.

The series, which stars Dean Winters (“Oz”) and Josh Duhamel, centers on two detectives with very different world views — one relying on cynicism and deception, the other trading in naivete and trust — who are thrown together to clean up Battle Creek, Michigan. Time will tell whether the series’ potential can be fully exploited within the structures of network TV, but given Gilligan and Shore’s involvement, we’ll go the trusting route on this one.

“Better Call Saul” (AMC), Premieres Sunday, Feb. 8 and Monday, Feb. 9 at 9 p.m.
There may never be another “Breaking Bad” on TV, but we still have a chance to enjoy some of its characters thanks to upcoming AMC prequel “Better Call Saul.” Not many would be up to the task of setting up Walter White’s eventual story, but Bob Odenkirk is a borderline national treasure, and his character James M. McGill — A.K.A. Saul Goodman — is one of the finest, funniest sleaze-bag lawyers of the current Golden Age of TV. Plus, fan favorite Mike Ehrmantraut (Jonathan Banks) has been literally brought back to life for the show, and the possibilities that there will be more of the same should bring fans back to AMC. Considering its other hit, “Mad Men,” is on its way off the air, the cable channel could use the revival.

“iZombie” (The CW), Premiere date TBD
The CW enjoyed huge success from its fall 2014 offerings, with “The Flash” shattering network records upon its premiere and “Jane the Virgin” being nominated for two Golden Globes. Expect the net’s good fortune to continue when Rob Thomas’s “iZombie” premieres in 2015.

Rose McIver stars as a sharp-tongued zombie who works in a morgue to keep a fresh supply of brains. The hour-long action-drama is adapted from a graphic novel published by DC Comics’ Vertigo imprint, but it still feels fresh. The characters are older than Kristen Bell and her high school cohorts who were on Thomas’s other famous series, “Veronica Mars,” but fans will recognize a similar pattern of witty banter and amateur sleuthing. Also, McIver sprinkles brains on her ramen. That’s just cool.

“Backstrom” (Fox), Premieres Thursday, Jan. 22 at 9 p.m.
Rainn Wilson spent eight years of his career as a punchline on NBC’s “The Office,” but he’ll be the center of attention in Fox’s upcoming police drama “Backstrom,” which will also give him a chance to exercise his dramatic chops. He plays Det. Lt. Everett Backstrom in the Portland-set procedural, a curmudgeonly yet brilliant sleuth who lives aboard a barge. Wilson has embraced off-kilter dramatic roles before, most notably in James Gunn’s “Super,” but expect fans who know him only for “The Office” to be stunned by the transformation. “Backstrom” is adapted from Leif G. W. Persson’s series of Swedish crime-drama novels.

Disney and Marvel continue to blur the lines between comics, film and television with their new prequel (mini) series “Marvel’s Agent Carter,” which will air while “Marvel’s Agents of SHIELD” is on mid-season hiatus.

Hayley Atwell stars as Agent Peggy Carter, a role she portrays in several past and present Marvel movies, including “Ant-Man” and “Captain America: The Winter Soldier.” The world could use another female action lead, especially on broadcast television, and we can’t wait to see what she brings to this eight-episode run.

“Daredevil” is up first, premiering in May of 2015. Charlie Cox stars as the blind crime-fighter, with Rosario Dawson co-starring. Showrunner Steven DeKnight said the Hell’s Kitchen–set show may resemble “The Wire” in tone.

Krysten Ritter plays the titular super-heroine in the next Marvel-Netflix installment, “AKA Jessica Jones,” which is also due out in 2015. Mike Colter will play Luke Cage on “Jessica Jones” and eventually headline his own Luke Cage–based Netflix series. The Luke Cage, Iron Fist and Defenders series are still awaiting titles and release dates.

“The Last Man on Earth” (Fox), Premieres Sunday, March 1 at  9 p.m.
As the man behind “MacGruber,” “Saturday Night Live” alum Will Forte will always have a special place in the hearts of comedy fans. That said, he also flexed some rock-solid dramatic acting chops for film “Nebraska,” but it’s time to return to his roots. And how better to do that than with an absurdist comedy that depicts an increasingly bearded Forte as the last man on Earth? And where better for such a series than Fox, which boasts some of TV’s best sitcoms mixed in with top-notch animated comedies? While the ratings rarely show it —especially the live-action stuff — we prefer to look past all that for this sitcom’s potential, which might just turn that Nielsen trend around.

“Westworld” (HBO), Premiere date TBD
Evil. An amusement park. Anthony Hopkins. What is there not to be intrigued about?

The HBO series expands on Michael Crichton’s 1973 film about a futuristic theme park in disarray after a malfunction with its robots, and marks the return of HBO alumni Ed Harris (“Game Change,” “Empire Falls”) and Jeffrey Wright (“Boardwalk Empire”). Evan Rachel Wood, Thandie Newton, James Marsden, Miranda Otto and Rodrigo Santoro also join the cast, with “Star Trek’s” J.J. Abrams, Jerry Weintraub and Bryan Burk signed on as executive producers. The network hasn’t said much about the series, but may not have to with this star-studded lineup.

Whatever “Westworld” plans to bring to humanity, humans will have to wait and see.

“Astronaut Wives Club” (ABC), Premiere date TBD
ABC is forgoing zombies, crime scene tape and Deep South voodoo all for the love of space. Later this year, the network will premiere “Astronaut Wives Club,” following the spouses of American heroes who captivated the nation during the height of the space race. Fans of the time period will get a glimpse into the Apollo and Mercury missions in addition to the famous Gemini space walk.

The series, based on Lily Koppel’s best-selling novel, has signed on JoAnna Garcia, Azure Parsons, Zoe Boyle, “Dexter’s Desmond Harrington and Matt Lanter who’s starred in “90210” and NBC’s “Heroes.” ABC has reached for the sky before with the short-lived “Pan Am,” but maybe it’ll have more luck in space. 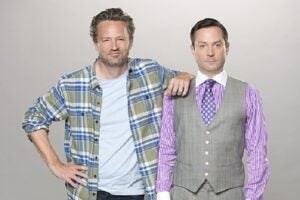 Coming to CBS, Perry and Thomas Lennon will star, respectively, as the disheveled Oscar Madison and the tidy Felix Unger on this latest version of Neil Simon’s popular play-turned-television series that debuted in 1970. “Parenthood” actress Lauren Graham and “Community” star Yvette Nicole Brown have also signed on to the cast.

The project could serve as a welcome relaunch for Perry on television. Since his time on “Friends,” he’s endured two short-lived series, NBC’s “Go On” and ABC’s “Mr. Sunshine.” Where the show goes will be left to audiences, who’ve seen their share of reboots in recent years on television and in film. But maybe for Perry, the third time will prove a charm.

“Wayward Pines” (Fox), Premieres Thursday, May 14 at 9 p.m.
We pretty much have hated every M. Night Shyamalan movie since “The Sixth Sense,” but we keep coming back to see if he can capture that old magic. With Shyamalan attached as an executive producer and director of the pilot episode, our curiosity has been piqued. The event series stars Matt Dillon as a U.S. Secret Service agent investigating the disappearance of two federal agents in a mysterious small Idaho town. We really liked what Fox did with “Gracepoint” (though we were clearly in the minority on that), giving us hope that Fox can make “Wayward Pines” great.

“Fresh Off the Boat” (ABC), Premieres Wednesday, Feb. 4 at 8:30 p.m. and 9:30 p.m.
We love that ABC recognizes that racial diversity extends beyond black and white. Once again, the network paves the way for Asians in lead roles with the Eddie Huang–inspired “Fresh Off the Boat.” Set in the mid-’90s, the comedy follows 11-year-old hip-hop-loving Eddie (Hudson Yang), who has just moved to suburban Orlando from D.C.’s Chinatown with his parents (Randall Park and Constance Wu). The last time a broadcast network comedy was fronted by an Asian lead was on ABC, as well. Margaret Cho starred on “All-American Girl” from 1994-1995. The first show to feature an Asian lead, however, was Pat Morita’s short-lived 1976 sitcom “Mr. T and Tina” — also, by the way, on ABC.

“Babylon” (Sundance TV), Premieres Thursday, Jan. 8 at 10 p.m.
Danny Boyle brings his film pedigree and the fresh face of indie darling Brit Marling to Sundance TV. The six-episode comedy follows an ambitious American PR exec (Marling) employed by the British police force. Her attempts to rattle the institution into the 21st century are met with supreme disinterest or outright condescension. Adultery, backstabbing, substance abuse and violence ensue — and that’s just within police headquarters. Look for fantastic supporting turns from “The Hobbit’s” James Nesbitt and cutie Nick Blood, who is sure to be one of the favorite shirtless TV stars of 2015. Marling is more than capable in commanding the ship, which makes us think we’ll stay in “Babylon” for a good while.