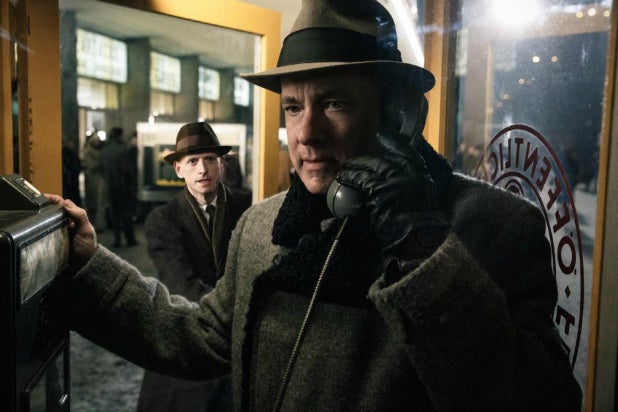 As Hollywood rolls out the 2015 Oscar contenders, it’s uncanny how the studios are focusing on topics that parallel the front-page news of international and national politics.

As America disagrees with Russian president Vladimir Putin over strategy in the Syrian War, the Cold War is warming up on the big screen with the recent release of two movies this season.

Steven Spielberg‘s absorbing thriller, “Bridge of Spies,” depicts how Russia and America each had spies that were caught gathering intelligence on one another in 1960. Both the script’s tense storyline and the film’s art direction do an excellent job of taking us back to the time when our countries were at great odds, culminating in the building of the stark Berlin Wall.

Also Read: Tom Hanks Puts Himself at the Center of the Cold War in New 'Bridge of Spies' Trailer (Video)

The film recreates the height of the Cold War and shows how espionage works — until one gets captured in act.

The film traces the famous story of Francis Gary Powers, who was shot down spying on the Soviet Union from a plane equipped with cameras, being exchanged for the convicted KBG spy and an idealist American student caught in east Berlin. Relations were so bad back then that the United States used a lawyer for the Soviet spy instead of formal government channels.

Watching this film about the past makes one ponder the modern day news. One can only imagine how American counter intelligence agents could be caught in the crossfire or jailed in Syria, as the Russians are becoming involved in that conflict.

And if seeing those 1960 tense times in “Bridge of Spies” isn’t enough to concern you about relations between East and West, just see Edward Zwick‘s “Pawn Sacrifice” starring Tobey Maguire. Again, the theme is the tensions of the Cold War; but this time, a chessboard is the battlefield. Billed as the match of the century, it was America’s youthful chess genius Bobby Fischer, a paranoid, self-hating Jew, versus the Soviet’s cool and supposedly unbeatable Boris Spassky. Expressing wild antics, Fisher worms his way under Spassky’s skin to emerge as the winner in the match and score a victory for American democracy.

New films reflect the political mood in America. Just as the U.S. is experiencing its four-year ritual of presidential campaigning, two movies have relevant subject matters.

Sarah Gavron‘s “Suffragette” reminds us how gallantly women fought for equal voting rights years ago in England. True, it’s not about our battles, but the issue of female empowerment is pretty obvious. Seems like its no coincidence that this film comes out right as Hillary Clinton’s campaign is regularly reminding us that it’s about time America had a female President. The Democratic Party debates are full of references about the strong possibility of a female President.

And as if our daily fix of the Presidential campaigns are not enough, one can go and watch the delightful David Gordon Green‘s “Our Brand is Crisis.” Just as the primaries are getting nasty, especially on the Republican side, we are treated to an entertaining script of the backstabbing and tensions of Americans working an election in Bolivia. Although the competition between Sandra Bullock and Billy Bob Thornton‘s characters are a hoot, their antics are also pretty revealing about the dirtiness of politics and how low opponents will stoop to win.

As Americans go to the movies in the coming weeks they cannot help but be struck by how much art is imitating life. On second thought, maybe the studios are not just that clever, scheduling these similarly themed movies for the end of 2015. After all, tensions between the Russians and the USA have been there for decades and it’s common knowledge that there is a Presidential election coming up in 2016.