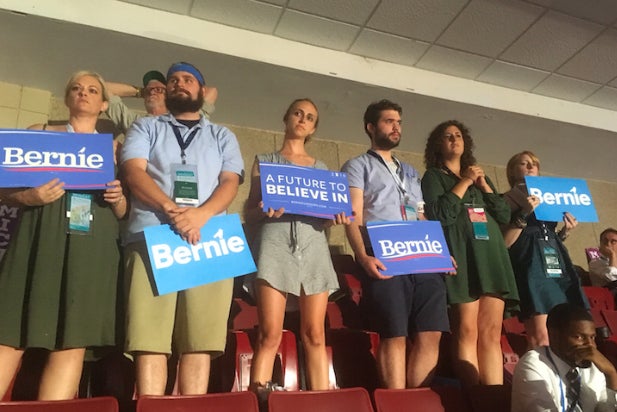 They are in the fourth-to-last row of the entire Wells Fargo Center in Philadelphia, six of them, cheering on Bernie Sanders’ every word.

“They stole it from ya, Bernie!”

It is 11 p.m. ET Monday, the opening night of the Democratic National Convention. Sanders is addressing the arena, and his six  diehard supporters know all of his catchphrases. When he asks the crowd if they know how much his average contributor gave, they shout down to him: “Twenty-seven dollars!”

There are many, many Sanders supporters like them, even here in the arena where Hillary Clinton plans to accept the Democratic nomination on Thursday.

When Sanders finally says — more than 10 minutes into his speech — that Clinton must be the Democratic party nominee, it is the first moment in his speech that the six don’t hang on his every word.

Clinton needs them, and she doesn’t have them — not yet. The obvious goal of the first night of the convention is persuading Sanders supporters to join Clinton, so that the convention can move on, and get unified. So that Hillary Clinton can beat Donald Trump.

Also Read: Elizabeth Warren: Donald Trump Is a Cheat Who Skips Out on Debts

Some people don’t want to get unified — not yet.

The conflict was obvious before the night even started. People who got off the train at Wells Fargo Center that afternoon were greeted with a sea of pro-Sanders slogans.

Two of them, Kelly Brooks and Jordan Stevens, traveled from Lansing, Michigan, to support Sanders. They posed for a picture with an umbrella that said “Yes I am still Sanders” and “Not With Her,” a play on the pro-Clinton slogan “I’m With Her.”

“He’s not out. Not until the delegates vote,” Brooks, 27, proclaimed, adding that she might vote for Green Party candidate Jill Stein.

“Bernie or Jill but never Hill,” she said. “And if Trump gets elected I’m gonna have to move to Canada.”

Sarah Silverman, a former Sanders supporter who has gotten behind Clinton, said from the stage Monday that the Bernie-or-Bust crowd was being “ridiculous,” and that it was time to back Clinton.

For some of them, that time may yet still come.

“I’m gonna vote for Jill Stein,” says one of the six, after Sanders finishes his speech. “But I’m going to work hard to pass progressive candidates into office. The presidency as we all know is just puppetry. We need to put lower-ballot candidates in office and make sure we get real change. Not just this incremental fake change that they spoon-feed us.”

His name is Jim Jeffers, he is 27, and he is from Philadelphia but has traveled the country as a Sanders volunteer. (In the picture above, he’s the one with the backwards hat and the beard.) He and the other six are members of a group called Reclaim Philadelphia, and they don’t trust the Democratic National Committee — especially after leaks over the weekend that indicated the DNC backed Clinton over Sanders.

They want to “expose the DNC and bring some light to the corruption that exists,” Emily Strausbaugh, 28, says. (She’s next to Jeffers, dressed in gray.)

They say what they’re doing is a revolution.

“It continues for the rest of all of our lives and to future generations,” Jeffers says. “And it’s a peaceful revolution. Let that be known.”

“But it is necessary,” Strausbaugh adds.