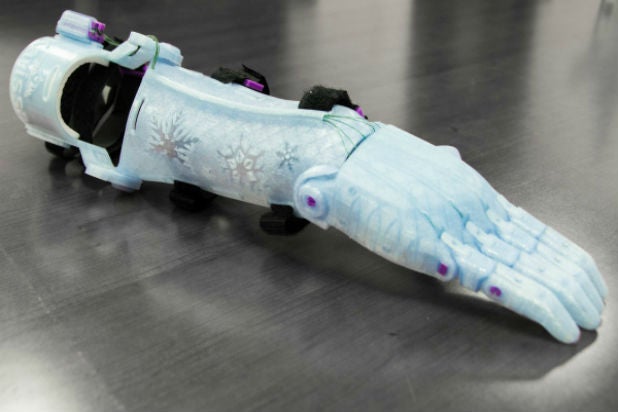 A 9-year old can officially “Let It Go” thanks to her new “Frozen”-themed prosthetic arm.

Karissa Mitchell was born without a right hand and most of her wrist. So her mother Maria reached out to a group of students at Siena College in upstate New York after hearing they had designed an Iron Man prosthetic arm for a boy in Ohio.

“Karissa really identifies with Elsa because she knows what it’s like to be different from everyone else,” Maria said. “She doesn’t want to be seen as different, which has made her extremely determined to do things as well, if not better, than others.”

Siena’s chapter of e-NABLE, which designs prosthetic limbs using 3D printers, spent six months designing the arm.When all was said and done, it took 30 hours to print and two hours to assemble.

The new arm, decked out in ice blue and snowflakes in honor of “Frozen,” will allow Karissa to perform everyday tasks such as picking up small objects.

“Our e-NABLE chapter reflects upon the Franciscan values that this school represents,” e-NABLE student leader Miranda Marnes said. “Knowing that we are using the skills and knowledge we have gained throughout our journey at Siena to make a difference in the lives of our recipients is just an amazing feeling.”

Watch Karissa try out the new arm below.