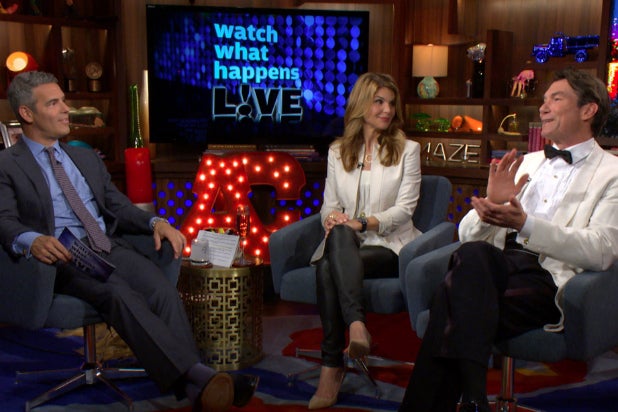 Lori Loughlin joined Andy Cohen on Bravo’s “Watch What Happens Live” Wednesday to promote her new Hallmark movie, but naturally all she got were questions about the upcoming Netflix “Full House” reboot.

When asked directly if she’ll be a part of the new version, Loughlin simply said, “I certainly hope so, yes.”

Cohen followed with a question about the potential, but unlikely, involvement of the Olsen twins, which Loughlin has no idea about: “I honestly don’t know,” she said.

The twins themselves had a little more information to share on the matter earlier this week.

“I’m going to call [Bob Saget] and get his perspective,” Ashley said during an interview with both twins in Women’s Wear Daily.

“I guess we’re going to talk to the creators and see what’s happening,” Mary-Kate added to the Tuesday conversation. “I’m shocked I haven’t heard from John [Stamos].”

Back to Wednesday’s “WWHL,” but still on the topic of the twins, Cohen’s Shady She-Gull swooped in to ask Loughlin the hard questions, like who was the better actress — Mary-Kate or Ashley?

“They were both good,” Loughlin responded. “But one of them cried the first season — I think it was Mary-Kate. They never really used her. It was Ashley that did most of the filming.”

Later, she couldn’t think of one unsexy thing about John Stamos when prompted, and joked that Comet the dog will demand the most money to appear in the coming “Full House” reboot.

After that segment, the group — which included Cohen’s other guest Jerry O’Connell — re-enacted Michelle’s memorable go-kart scene from the ’90s T.G.I.F. sitcom.