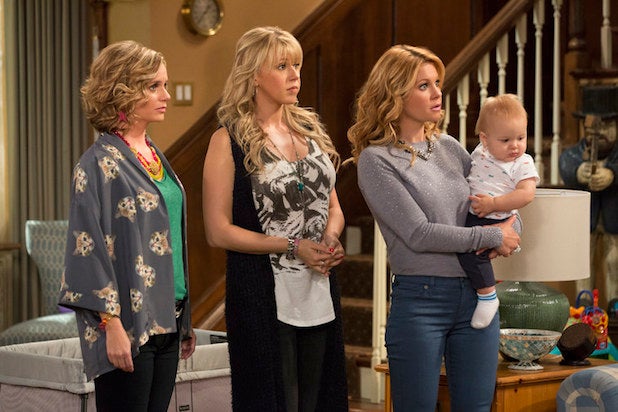 “Fuller House” premiered on Netflix Friday after critics welcomed it to the streaming service with mostly negative reviews.

“Excruciating,” “tinged with the sickly-sweet of rot” and bordering “on the obscene” are just a few of the unkind words critics had for the “Full House” sequel series, which currently holds a score of 39 percent on Rotten Tomatoes.

One critic even wrote, “There’s a point where nostalgia becomes more like necrophilia, and ‘Fuller House’ immediately crosses that line.” TheWrap’s Ned Ehrbar agreed and wrote, “in practice, it’s just a stark example of how nostalgia looks best at a hazy distance.”

Read seven of the worst reviews below.

Margaret Lyons, Vulture:
“The first four minutes of ‘Fuller House’ are four of the most excruciating TV minutes ever broadcast; shrill, garish, unfunny, and further poisoned by the live audience’s baffling apparent appetite to hear the catchphrases of the show repeated now, in modernity. ‘How rude’ elicits applause. Future societies will have no choice but to judge us harshly for our sins.”

Hank Stuever, The Washington Post:
“There’s a point where nostalgia becomes more like necrophilia, and ‘Fuller House’ immediately crosses that line. Exhumed on the pretense of millennial desire (you loved the show as kids; you’ll love it even more as stunted, binge-watching adults), Netflix’s ­13-episode revival of the old ABC sitcom ‘Full House’ is less an update than an irony-free pantomime of the past. It represents a new low in the current culture’s inability to leave behind the blankies, binkies and wubbies of one’s youth.”

Richard Lawson, Vanity Fair:
“Something troubles San Francisco. What once was fresh–bright, blonde, clean as a fogless sky–has wilted, dimmed, become tinged with the sickly-sweet of rot. What happened to our San Francisco, or rather that one house in San Francisco? The place that, some 29 years ago, swaddled us in a viscous goop of sincerity so that we could be better armed, inoculated, as we, a nascent people, a generation dancing across the slip and tilt of millennia, headed into a new age of irony?”

Josh Bell, Las Vegas Weekly:
“In one sense, the team behind ‘Fuller House,’ which is led by original ‘Full House’ creator and executive producer Jeff Franklin, has done a fantastic job: They’ve successfully recaptured all of the terribleness of ‘Full House,’ while updating it with new terribleness marketed at a self-aware, pseudo-ironic audience of millennials. The first episode reunites nearly every major actor from the original’Full House’ run, with the exception of twins Mary-Kate and Ashley Olsen, who have moved on from acting to oversee a billion-dollar fashion empire. As such, the extra-long pilot is like a live-action BuzzFeed listicle, cramming in every catch phrase, nostalgic callback and self-referential wink (the mention of the Olsens’ character Michelle is accompanied by all the actors literally looking right at the audience) it possibly can.”

Also Read: 'Fuller House' Creator on How Michelle Will Appear Without the Olsen Twins

Jeff Jensen, Entertainment Weekly:
“Skipping this embarrassment are Mary-Kate and Ashley Olsen, who became lifestyle brands while playing Michelle and have had a turbulent relationship with fame ever since. In the debut, Saget says Michelle is pursuing a fashion career–and the cast gives side eye to the camera, drawing approving hollers. Why the shaming? Because the twins don’t do nostalgia? Because they have too much self-respect for a cash grab and a cheap ovation? Regardless, I resent getting co-opted into this ugliness. Olsens, you made a quality call. Readers, follow their lead. ‘Fuller House’ doesn’t deserve your devotion. It deserves a foreclosure notice.”

Molly Eichel, Philadelphia Enquirer:
“There’s no reason for ‘Fuller House’ to exist, except to feed into the constant nostalgia loop in which we seem to be stuck. One of the downsides of constant television outlets is that a show doesn’t really need a reason to exist to be seen. But the weird thing about ‘Fuller House’ is that it’s not a disappointment – like, say, Netflix’s ‘Arrested Development’ reboot. It accomplishes what it sets out to do – be a bland family sitcom playing to a nostalgic audience that really wanted to give Coulier a paycheck again. But that doesn’t mean it’s any good.”

Joshua Alston, A.V. Club:
“Despite the plaintive catchphrase of one Uncle Jesse Katsopolis (John Stamos), which reappears along with every other vaguely recognizable zinger from the original series, ‘Fuller House’ doesn’t deserve mercy. The show isn’t just bad, it borders on the obscene, as much an affront to those bemused by a reboot of the sitcom that anchored ABC’s once-mighty T.G.I.F. comedy block as those receptive to it.”