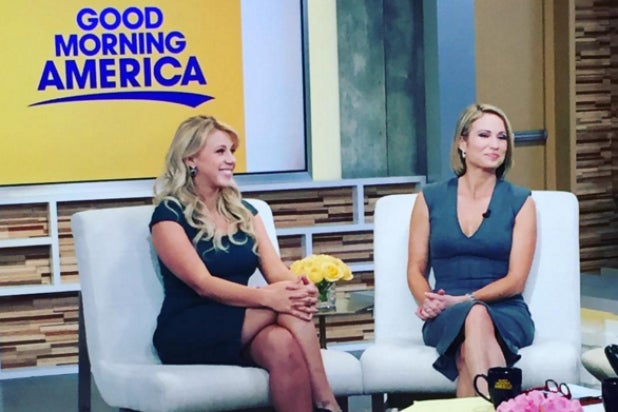 Jodie Sweetin is joining “Dancing With the Stars” for season 22, when she’ll be partnered with pro Keo Motsepe. The “Fuller House” star announced her new adventure this morning on ABC’s “Good Morning America.”

“We have just had the first couple of days,” Sweetin told Robin Roberts and the gang of early practice. “It’s so fun!”

“We got through some basic moves of several different styles of dance, we had a lot of fun with it,” she continued. “He and I get along really well — he’s really excited that maybe we’ll get the chance to get past maybe Week 3 or 4.”

The 22nd season of “Dancing With the Stars” will begin on March 22.

It’s barely 10 a.m. ET and Sweetin has had a big morning already. In addition to this exciting endeavor, her new series “Fuller House” was renewed by Netflix for a second season on Wednesday.

Even Stephanie Tanner couldn’t find anything “rude” about the actress’s day thus far.

Here’s what Sweetin shared on Instagram shortly after her “GMA” “DWTS” announcement:

FINALLY!!! I can share the fantastic news that I’ll be joining DWTS @dancingabc season!! Can’t wait!! The big announcement was on @goodmorningamerica this morning!! I have the amazing @keo_motsepe as my partner on this wild ride!! #teamkeoandjodie #dwts #season22 Dress- @kevanhalldesigns Jewelry & Shoes- @gwtcorpferi Handbag- @nicolasfelizola hair @brianmagallones makeup @janicekinjo stylist @shannonmcclure68