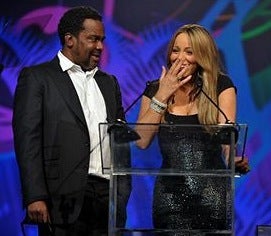 George Clooney’s “Up in the Air” foil Anna Kendrick accepted the first award by telling the crowd, “Being in the room with this kind of talent is a privilege.” By “talent”, she meant Clint Eastwood, Helen Mirren, Ivan and Jason Reitman, Jeff Bridges, Jeremy Renner, Michelle Pfeiffer, Marion Cotillard, Quentin Tarantino and Rob Marshall amongst others.

To apply a metaphor from this awards season, if Kendrick was a “Fergie” amongst the proverbial cast of “Nine," the other “Fergie” on the awards dais was Mariah Carey. However, Carey made a less gracious debut as an acting award winner at the Cartier- and Mercedes Benz-sponsored black tie affair.
Carey appeared dazed while giving a rambling speech of sentence fragments to accept an award for her work in “Precious” from the film’s director Lee Daniels.
At one point, Carey picked at Daniels’ eyelids. She apologized mid-speech, saying, "You have to forgive me  … (beat) … I’m a little … (beat)…,” at which point a male guest filled the pause by yelling out “f—ed up?!”, to which Carey smiled and said “yeah, that!” and pointed to the shouter.
Surprise guest Sean Penn took to the stage next, asking the crowd, “Some of you getting this (Carey’s speech) for YouTube?”
Penn was spot-on. Two hours and 15 minutes later, the bizarre appearance appeared online. Here it is:
The jokes continued to flow from Jason Reitman during his acceptance for Director of the Year from fellow director Norman Jewison. “I can’t explain how good it feels to have my cast (of “Up in the Air”) and Norman Jewison speak about me so nicely. It feels about as good as Mariah Carey feels right now," Reitman zinged.
Even the wait staff joined the applause.
At right, Career Achievement Award winner Morgan Freeman delivered the hardware to his counterpart in the actress category, Helen Mirren. In accepting her Chihuly Glass Sculpture, Mirren singled out “the great gay men and women (in the industry) for their invaluable contribution to my career.”
While accepting the same unusually shaped trophy for a Visionary Award, Tarantino said it “looked like a bong.”
Marion Cotillard revealed to Marshall that she first got the inkling that “America had great things in store for (her)” when her future co-star Daniel Day-Lewis presented her with a breakthrough award on the same Palm Springs stage two years ago. Weeks after that night, Cotillard won the 2008 Best Actress Oscar.
Fans of the “The Fabulous Baker Boys” enjoyed a 20-year reunion of Jeff Bridges and Michelle Pfeifferon stage.
After shooting “The Hurt Locker” in the Jordanian desert, star Jeremy Renner offered the Palm Springs desert some praise: “The last time I was in a desert, I had on a heavy suit and explosive diarrhea.”