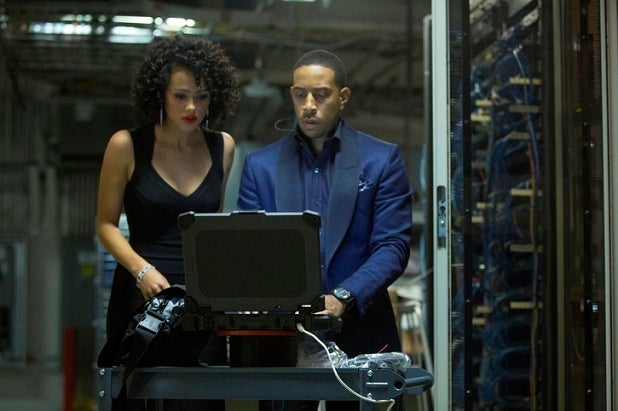 You didn’t really think that Vin Diesel, Dwayne Johnson and the high-powered heroes of “Furious 7” were going to let a mall cop on a Segway beat them did you?

Universal’s newly minted $1 billion blockbuster cruised to its third straight triumph at the domestic box office with $29 million this weekend, and is bearing down on $300 million domestically. The ultra-action saga held off two wide openers, Kevin James’ over-achieving “Paul Blart: Mall Cop 2,” which took in a surprising $24 million for Sony Pictures, and the teen cyber-bullying horror tale “Unfriended,” which was third with $16 million for Universal.

“Furious 7” on Friday crossed the billion-dollar mark at the worldwide box office in its 17th day of release, and is up to $1.15 billion globally, making it the highest-grossing film in Universal’s 103-year history. It achieved the milestone faster than any film ever has, and it made quick work of the newcomers this weekend with $8.3 million Friday and never looked back.

The strong second-place showing by “Blart 2” was less than the $31 million that the original debuted with in 2009, but was about $7 million more than analysts and Sony had projected, and it confounded critics. The PG-rated family film has the rare and dubious distinction of a “zero” rating on Rotten Tomatoes, with all 38 reviews cited panning the film. Moviegoers liked it more than that, giving it a “B-” CinemaScore, and audience members under 18 years of age — the target demographic — awarded it an “A-.”

“If critics were to see this with their families, they would laugh and laugh hard,” said Rory Bruer, Sony’s distribution chief. “Blart 2” was directed by Andy Fickman and follows the heavyweight hero to a convention in Las Vegas.

The studio and star James, who produced with Adam Sandler and Todd Garner, can laugh all the way to the bank. The opening puts “Blart 2” well on its way to profitability since its production budget was a modest $30 million. And it comes at a good time for Sony executives, who were dealing with the headaches caused by the release Friday of a new batch of hacked emails and documents.

Universal’s “Unfriended” was a financial winner, too. The R-rated Blumhouse Productions chiller, written by Nelson Greaves and directed by Levan Gabriadze, cost just $1 million to make.

The marriage between the horror producer and the studio is clearly working. “Unfriended” is the fourth straight win for Jason Blum’s company, coming on the heels of January’s “The Boy Next Door” and last year’s “Ouija” and “The Purge: Anarachy.”

Teen girls were behind the over-sized social media footprint of “Unfriended,” in which most of the action takes place on computer screens, and they dominated the audience, too. Sixty percent of the crowd was female and 75 percent were under 25. Typically hard-grading horror fans gave the cyber-bullying tale a “C” CinemaScore.

“Child 44” a thriller starring Tom Hardy and Noomi Rapace, managed just $587,000 from 510 theaters in its debut for Lionsgate. The film last week had its Russian release blocked by officials there who found its portrayal of that country offensive.

DreamWorks Animation’s “Home” was fourth with $10.1 million that lifted its domestic total over $140 million. Next came Fox’s Nicholas Sparks’ adaptation “The Longest Ride,” which romanced $7 million in its second week. The Will Ferrell-Kevin Hart comedy “Get Hard” was sixth with nearly $5 million and is about to cross $80 million after four weeks for Warner Bros.

The overall weekend box office was about 10 percent under the comparable frame last year, which looked a little like this one. Last year, “Heaven Is for Real” from Sony took in $22 million to finish second behind a blockbuster that won its third straight weekend, “Captain America: The Winter Soldier.”