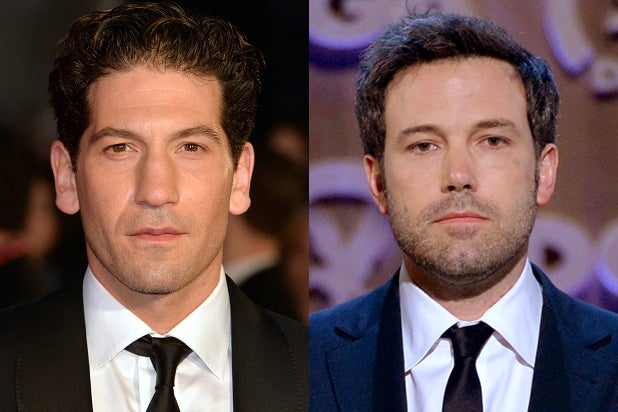 After sharing a tank with Brad Pitt in “Fury,” Jon Bernthal is in negotiations to join Ben Affleck in Gavin O’Connor’s thriller “The Accountant,” multiple individuals familiar with the Warner Bros. project have told TheWrap.

Once he takes off Batman’s cowl, WB’s favorite son Affleck will star as a mild-mannered accountant who moonlights as a deadly assassin.

J.K. Simmons is in talks to co-star in the film, while Anna Kendrick is being sought for the female lead.

Bernthal’s potential role remains under wraps, though Affleck is said to be a fan of the actor, who’s also rumored to be under consideration for a role in Affleck’s upcoming WB crime drama “Live By Night.”

Lynette Howell and Mark Williams are producing “The Accountant,” which Warner Bros. executives Drew Crevello and Jon Gonda will oversee on behalf of the studio.

Bill Dubuque wrote the script, which was voted to the 2011 Black List, and production is scheduled to start in January.

Bernthal has been on a roll since exiting his star-making role on “The Walking Dead.” He played the lead in Frank Darabont’s follow-up series “Mob City,” worked with Leonardo DiCaprio and Martin Scorsese on “The Wolf of Wall Street” and played Robert De Niro’s son in WB’s “Grudge Match.”

Bernthal recently wrapped WB’s Zac Efron movie “We Are Your Friends,” Denis Villeneuve’s cartel drama “Sicario,” Gerardo Naranjo’s Untitled Roadie Movie and Alfonso Gomez-Rejon’s indie drama “Me & Earl & the Dying Girl.” He also has a role in Paul Haggis’ HBO project “Show Me a Hero” and is slated to join Catherine Zeta-Jones in the drug drama “The Godmother.” He’s represented by WME and the Burstein Company.