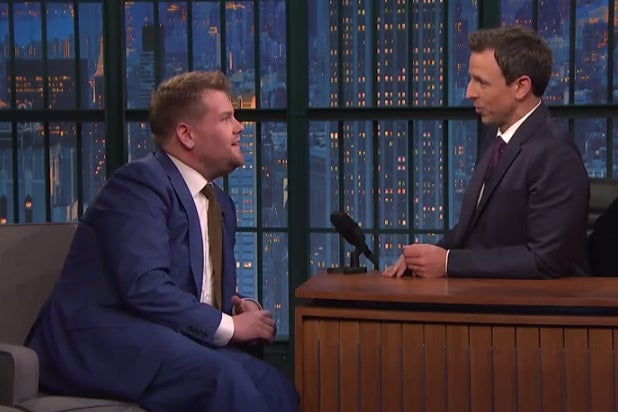 Seth Meyers and James Corden are buddies who will soon be going at it head-to-head at 12:30 a.m. every night — let’s see if in a few years they remain as friendly and cordial as they currently are. (Remember when Jay Leno and David Letterman were pals?)

Meyers, the former “Saturday Night Live” head writer, had Corden, the incoming host of CBS’s “Late Late Show,” on his NBC late-night talk show Tuesday. The two spent a good portion of their segment genuinely gushing over each other. For two comics who will soon duke it out, there has been nothing but love ever since Corden’s hiring was exclusively announced by TheWrap in August.

“There was like a leak before it was official, and the first person to send me an email saying, ‘This is amazing, I’m so excited for you,’ was from this man here,” Corden said on “Late Night,” referring to Meyers. “And then to have me on the show, truly, it’s overwhelming how unbelievably kind you are.

“I tend to get a tightness in my chest when I think about it too much,” Corden said, when asked if he’s excited and/or nervous. “It’s daunting. I’ve never done anything like this.”